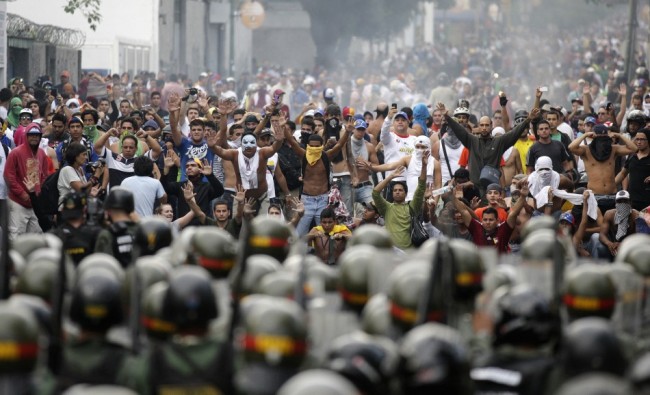 Capriles alleges Sunday’s election was stolen from him through widespread abuses. He has not yet formally filed a request for a recount with the National Electoral Council, which on Monday ratified the 50.8-to-49 percent victory of Nicolas Maduro, Hugo Chavez’s anointed successor.
Judge Luisa Morales said Wednesday that Venezuela’s voting system is so automated that a manual count doesn’t exist. But technically, a recount is possible as a paper receipt is issued for every vote cast.
protests in Venezuela left 7 people dead. The newly elected President of Venezuela Nicolás Maduro accused the opposition for the violence.

Judge Luisa Morales said Wednesday that Venezuela’s voting system is so automated that a manual count doesn’t exist. But technically, a recount is possible as a paper receipt is issued for every vote cast.

Overall, the post-election situation in Venezuela remains unstable. The opposition is still accusing the government of stealing the elections while Maduro’s government accused the opposition for inciting violence. According to New York Times, Maduro also accused Washington for the events in Venezuela. In a broadcast the President of Venezuela said, “the United States Embassy has financed all the acts of violence in this country,” adding that violent groups, during the protests, were directed by two American military attachés whom he had expelled the day that Hugo Chávez died.

Mr. Maduro is to complete the six-year term of President Hugo Chávez, who had cancer and died March 5. His new term began in January.
In an extraordinary day of charges and countercharges, Mr. Maduro cut into regular television and radio programming three times with special national broadcasts that all stations are required to carry.

In a second broadcast, from an office of the government-run oil company, Petróleos de Venezuela, Mr. Maduro lashed out at Washington.
“The United States Embassy has financed all the acts of violence in this country,” he said, adding that violent groups were directed by two American military attachés whom he had expelled the day that Mr. Chávez died. He accused another American Embassy employee of plotting to sabotage the nation’s electrical system.

The question now, amidst this chaos: what will happen to the Chavista movement? Without the charismatic Chavez, can it survive? Capriles won a respectable 44 percent of the votes when he faced off against Chavez in elections in February; a few months later, after Chavez’s death, he garnered over 49 percent against Maduro, suggesting that at least some Chavistas don’t think Maduro is quite up to the job, even though he promised to carry on many of the pro-poor policies that Chavez was famous for.

“The march to the center of Caracas will not be permitted,” Mr. Maduro said in his first broadcast, from a government-run health clinic. “I will use a hard hand against fascism and intolerance. I declare it. If they want to overthrow me, come and get me. Here I am, with the people and the armed forces.”
He said five people died at opposition protests on Monday in different parts of the country, and, pointing a finger at the camera, he said Mr. Capriles was responsible. Mr. Maduro later raised the death toll to 7, but the number of deaths related to the protests could not be independently confirmed.
The government said that the 7  people who were killed were supporters of Mr. Maduro. But the father of one of those killed, Ender José Bastardo, 21, disputed that account.