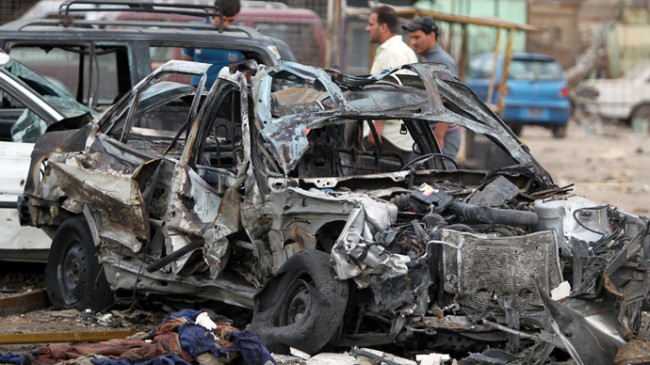 Under the rule of despot Saddam Hussein, Sunni’s held favor in Iraq.  The Shia population was treated as the minority sect in the country.  After the U.S. invasion, and subsequent withdrawal, the Shia community is in control of the government.  The coalition sought by the American government appears to be a thing of the past.

27 people died last Monday as at least two car bombs were exploded.  On the previous Friday, a bomb was detonated at a Sunni mosque, and at a restaurant frequented by Shiites.

There are numerous clashes between government forces and civilians, but much of the bombing is pure sectarian violence, aimed at resurrecting violence between Sunni and Shia, which never really ended.

Sunnis and Syrian rebels are closely knit.  Both feel that the Shia population is oppressing the Sunni population.  The Syrian uprising has added fuel to a growing fire.

Less than a week ago, the Iraqi government, which is mostly Shia, banned television and radio broadcasts by nearly all networks, including Al-Jazeera.

A shadowy militant group linked to former dictator Saddam Hussein is behind much of the insurgency.  The Army of the Men of the Naqshabandi Order describes themselves as a group dedicated to protecting the minority Sunnis from Shia oppression.

The Naqshabandi army insists it was part of the retaliation for the Shia government’s deadly attack on a protest by Sunnis in the town of Hawija.  The action prompted attacks on Shia in several northern cities, killing at least 170.

The army posted on its website that it will attack Baghdad “with an iron fist … the enemies of Arabism and Islam”.  They are referring to the close ties between the Shia government of Iraq, and Iran.

“The intelligence we have clearly indicates, beyond any doubt, that the Naqshabandi Army is involved in the recent clashes” in the north of the country, said Shiite lawmaker Hakim al-Zamili, who sits on parliament’s security and defense committee.

The violence is increasing.  At least 218 people have been killed, and dozens more injured as of a week ago last Tuesday.

Iraqi officials, in response to the escalating violence, have closed their border with Jordan for the time being, and an Interior Ministry statement said that it is “related to the country’s domestic affairs.” The Iraq-Jordan border crossing has been shut down before because the route crosses through the Sunni cities of Fallujah and Ramadi, which have been focal points of anti-government protests, sentiment and anger.

The Iraqi government’s intelligence confirms that the Naqshabandi army is behind much of the uprisings.  They are suspected to have a cache of small and medium range arms.  Their numbers range from 1000 to 5000.

The army is believed to be led by Izzat Ibrahim al-Douri, a former Saddam deputy, who is the highest ranking member of the Hussein regime still not captured.  He often appears on video wearing insignia displayed when the Sunnis were still in power under Hussein.

Another video of him aired in January to rally Sunni protesters demonstrating against the government, promising them the support of “all the national and Islamic forces,until (their) legitimate demands are achieved.”