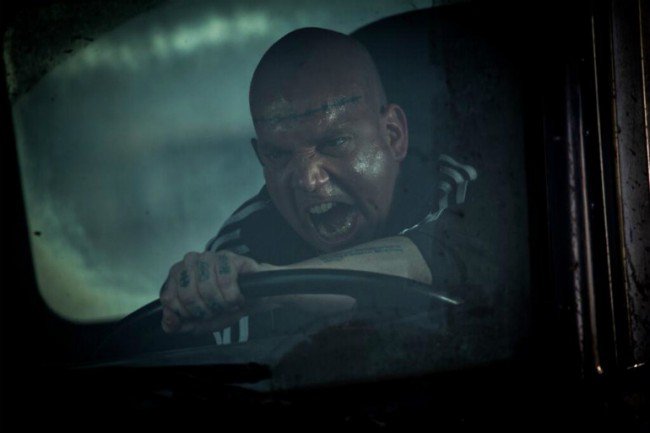 The Amazing Spider-Man 2 director Marc Webb tweeted this first image of Paul Giamatti as the thick-skinned villain, although it looks like the Twitter picture shows Paul without his super villain ‘rhino’ prosthetics of ramming horn and armour.

The film which is the next in the franchise re-imaging of the Sam Raimi Spiderman films, will feature a trio of baddies for actor Andrew Garfield’s Spiderman to tackle. Besides Paul Giamatti as Rhino; actor Jamie Foxx will be Electro, a power line worker who has an accident that allows him to harness electricity at will. Also actor Dane Dehaan of Chronicle will be appearing in the movie as Harry Osborne, though it hasn’t been confirmed as to whether he’ll take on the mantle of Green Goblin in this film.

Rhino is Russian Mafia enforcer Aleksei Mikhailovich Sytsevich who has more brawn than brains. While he doesn’t have the intelligence of Electro, he is at least ambitious. We don’t quite know what his backstory in the movie will be, but in the Marvel comic verse he volunteered for the Rhino grafting experiment because he thought it would help him to increase his standing in the Russian mafia.

In an interview with the ShowBizSpy almost two years ago, Paul Giamatti said then that he wanted the part. He also said, “I thought Rhino was the greatest thing when I was a little kid. It was a guy who was basically in this rhinoceros outfit and I always thought; ‘Why don’t they have The Rhino in one of their movies,’ but maybe The Rhino wasn’t that big of a deal for anybody but me. … If they ever go with The Rhino I would be ready and waiting.”

With set photos emerging just last week for The Amazing Spider-Man 2 featuring what many theorized was Paul Giamatti’s stunt double for the film and Marc Webb’s Twitter picture of Rhino “in action” today, fans will really be on the look out for more images on the net for the 2014 film.

While quite a few Raimi Spiderman fans were a bit disgruntled about the remake, the new film(s) seem to be fitting in quite well with the Marvel comic universe in an attempt to capitalise on the super hero film craze that is sweeping Hollywood at the moment.

Emma Stone and Sally Field will be back in their roles as Gwen Stacy and Aunt May Parker. Mary Jane will be introduced with a small role in this film after it was confirmed that on March 14, 2013 that the actress Shailene Woodley had concluded filming her (Mary Jane’s) scenes. J. K. Simmons has said he would like to reprise his role as J. Jonah Jameson from Sam Raimi’s Spider-Man trilogy if the studio offers it to him. No news has surfaced as to whether he has been asked.

One interesting fact is that Webb is shooting the film in the anamorphic format, instead of being filmed digitally. Sony has also revealed this would be the first Spider-Man film to be filmed entirely in New York and will be the largest film production shot in New York City.