Angelina Jolie back being a star on the red carpet 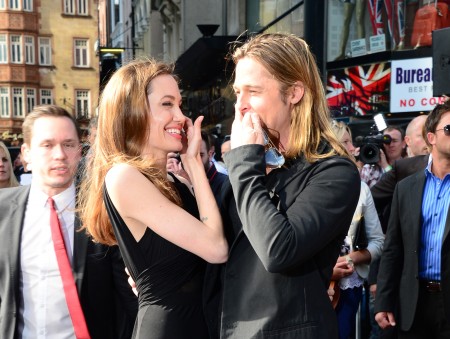 Angelina Jolie was back being a radiant start on the the red carpet this Sunday in London. Angelina attended the premiere of Brad Pitt’s new movie: “World War Z”. The Yves Saint Laurent dress that she wore to this event didn’t reveal anything other, than her slender, and enviable body. A brave move especially because the world was watching her. This was her first public appearance since she had undergone a double mastectomy. The operation was done this past February.

Her reason for this extensive operation was to eliminate the high risk of getting breast cancer. Jolie first had some tests done which confirmed that she carried the cancer genes, BRCA1. She was extremely afraid that she would get breast cancer, just like her mother, and that she wouldn’t be able to see her children grow up. However today she shined together with Brad Pitt, and they were both back being the stars they used to be. They showed the British public how it’s done on the red carpet.

Angelina looked radiant and her choice of dress was excellent. Albeit again black, but this color seems to suit her the most, and she feels the most comfortable in. The YSL dress didn’t reveal any cleavage, but it did show a bit of her mid section because of the see through black mesh, long flowing skirt which accentuated her long slender legs, and it had a modest neck line. The upper part of the dress had a wrinkled effect given the dress several textures, and making it more interesting than it would have been if it had been in the same type of fabric. Brad Pitt kept his outfit simple, by wearing a black suit, and a black t-shirt underneath it which had a v-neck. Brad had his hair long, and in a similar fashion to that of Jolie. They seemed to have coordinated their outfits, and both glowed in an understated, and glamorous way. The golden couple were back where they belong: being the star on the red carpet.

Angelina Jolie told reporters who were present at the premiere: “I’m here for Brad, I’m so proud of him,” Brad Pitt also wanted to comment on his partner, and said the following about Angelina: “That’s who I fell in love with from the very beginning, the person that you see now is the person that I’ve always known and she’s heroic and incredibly strong and will attack any problem head-on and make it work.”

The movie that they were promoting, “World War Z” is about a Zombie pandemic that threatens the status quo, and might even destroy humanity. Of course there is one hero who might stop this catastrophe from happening, and that is Brad Pitt’s character Gerry Lane. In this drama and horror flick we will also get to see Matthew Fox act again. (Most people will remember him as Jack Shepard from Lost, others will remember him from being in a lot of trouble lately because he has difficulties holding his liquor.) You will also get the opportunity to judge Michiel Huisman’s English speaking skills because he is from The Netherlands, if you get bored watching widely attractive men battling against zombies.

Let’s hope “World War Z” is worthy of Angelina Jolie’s presence on the red carpet. At least it was great to see that she was back being a star and that even a double mastectomy doesn’t keep her away from showing support.