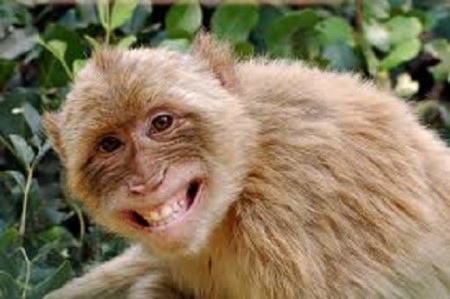 A 55-million-year-old monkey with a human face and feet may show when human beings took their own evolutionary path away from there primates cousins.

Bloomberg BusinessNews reports that skeletal remains 3 inches in diameter had been unearthed in 2003 by a farmer who’d been prospecting for relics in an abandoned paleontological site, in central China’s Hubei province. The Institute of Vertebrate Paleontology and Paleoanthropology in Beijing have been analyzing the petrified remains for 10 years.   It findings were publicized in a paper issued just days ago.

The monkey was from the tarsiiforme family of primates, which has certain characteristics in common with anthropoids, a group of higher – level primates that include Homo sapiens.  The monkey has the feet and face of a human being.

The new primate has been named Archicebus Achilles because its heel bone is like a human’s.  It has fingernails and toenails, a round face, short snout, and eyes placed closer to the front rather than to the side of its head.

It also has slender limbs and a tail that is long and disproportionate to size of its body.

Animal tails are used for balance, as social signals, or to brush away flies.  New World monkeys have what are known as prehensile tails, which allow them to grasp tree branches.

Human embryos have tails, about one-sixth of their size.  As the embryo becomes a fetus, the tail is absorbed by the growing body. The vestige of a tail is the “tail bone,” or coccyx, which is attached to the pelvis, at the bottom of the vertebral column. Obviously, it does protrude, like the tail of a dog.

The smallness of the eyes of Archicebus Achilles suggests that it was diurnal rather than nocturnal.  In other words, it was busiest during the day.  This discovery supports the proposition that small mammals were the earliest primates, living in trees, active during the day, and subsisting on insects.

The remains of Archicebus Achilles will be a reference points for future fossil discoveries.  The remains elucidate a lot of theories about the origins of anthropoids.

According to About.com, there are certain characteristics that distinguish mammals from reptiles.  The most obvious characteristic is the fact that female mammals have milk-producing mammary glands and suckle their young, as reptiles do not.  Also mammals have a furry covering rather than a scaly one.  And of course they have warm – blooded metabolisms.  In addition, the shapes of their heads and neck bones set them apart from reptiles.

The first mammals evolved toward the end of the Triassic period from therapsids, the line of mammal-like reptiles that originated in the early Permian period.  Therapsids had proto-mammalian traits such as fur, cold noses, and warm-blooded metabolisms.  They may also have been the viviparous rather than oviparous, meaning that their young came from their bodies rather than from eggs.

The Permian period extended from about 300 to 250 million years ago.

By the time therapsids became were extinct, by the mid-Jurassic era (200 to 150 million years ago), mammals had developed.

The mammals of the Mesozoic Era were the size of mice.  This kept them out of sites of the dinosaurs, which were the dominant land animals on earth. They survived by feeding on plants, insects and small lizards, and living high up in trees.  They also hunted at night, when most dinosaurs were asleep.

Early mammals included:  Castorocauda, known as the “Jurassic beaver”; Cronopio, a kind of saber-toothed squirrel; Zalambdalestes, the daddy of modern rodents; and Hadrocodium, tiny mammals with very large brains.  Another mammal of the time, Purgatorius could have been the direct ancestor of human beings.

But none of these mammals had human faces and feet.

Modern apes possess such humanlike features, but Proconsul,  is an extinct genus of primates that scientists consider to be the direct ancestor to the apes, existed only 23 to 25 million years ago during the Miocene epoch (Wikipedia).

So Archicebus Achilles may be the earliest primate that are head to toe like men, and may represent the time when mankind parted company with primates.