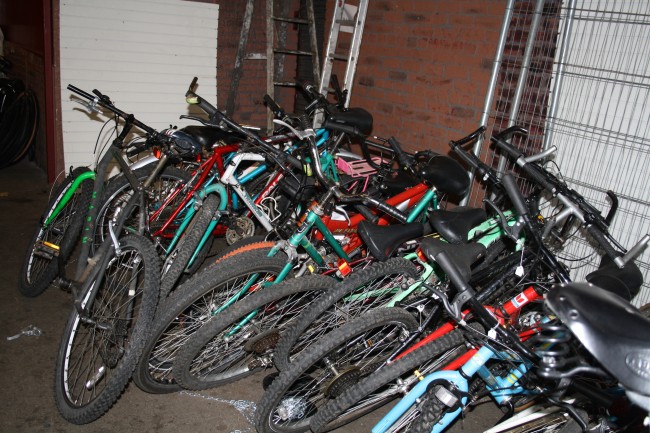 The WNBR which stages these events, use the nude riders as a human signboard to get across a very environmental message, but the bike ride isn’t part of the Mexican culture. It started someplace a lot colder.

The event began nine years ago in Canada and has been held annually every year in participating cities throughout the world. Organisers of the event say that they hold it to raise awareness of the importance of cycling for healthy exercise and as a way to reduce fossil fuels.

Participants and organisers also claim that riding naked serves to highlight the fragility of the human body and the need for drivers to be more careful on busy city streets.

The World Naked Bike Ride (WNBR) is an international clothing-optional bike ride in which the participants plan, meet and ride together en masse on any human-powered transport. The vast majority of past and present participants generally choose bicycles but a various amount also take part on skateboards and inline skates. The main message is delivered regardless of what mode of “natural” transport you use according to organisers their aim is to, “deliver a vision of a cleaner, safer, body-positive world.”

The dress code is “bare as you dare”. Full and partial nudity is encouraged, but not mandatory, on all rides. There is no mandate to cover intimate parts; this is a distinguishing feature of WNBR against other cycling events. Apparently, looking at pictures of the event in Mexico City, most of the riders decided to “go all out,” with only a few sporting snazzy underwear.

In the annual event, creative expression is also encouraged to generate a fun and immersive atmosphere during the ride. This is considered essential in order to capture the attention and imagination of the public and media, as well as to make the experience more personalized and fulfilling for the riders.

Body art, such as body painting, is used a lot as well as costumes, art bikes; portable sound systems like loud speakers, microphones, bullhorns and radios; and musical instruments or other kinds of noisemaker.

Traffic in Mexico City came to a standstill as spectators stared in astonishment and took pictures or filmed the bare cyclists. The cyclist’s themselves, who were naked or semi-naked, streamed past some of the city’s most famous landmarks. They all, whether they “dared to bare” or not, seemed to be enjoying themselves tremendously.

Correspondents say that although the city has introduced a series of bike-friendly policies, millions of vehicles clogging the streets every day make cycling a serious challenge. The rally ended in Zocalo Square.

One cyclist, who said her name was Mila, explained that getting naked on a bike was the best way to get their message across. She said, “In Mexico it is a nightmare to ride a bicycle. It’s almost as if you don’t exist, you are a ghost.”

Another participant, fellow cyclist Yovana Floyd said, “We fear going out every day and not knowing if we will return to our homes.”

Despite the claim from correspondants from Mexico City of a ride that had “thousands” of participants, the Mexican media estimates that about 300 cyclists took part in the demonstration. But regardless of the actual number, the naked cyclists brought Mexico City to a standstill and it appears that a bit of “naked” aggression helped them to get their environmental message across.