Paula Deen As A Zombie in The Walking Dead?

Love And Best Zombie Dishes To All 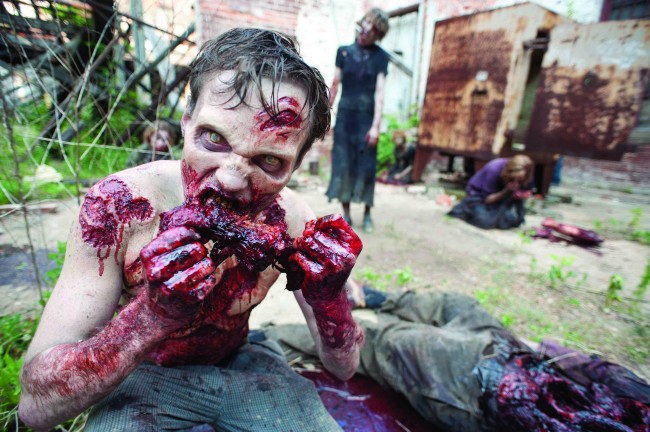 Celebrity chef, and all around annoying personality, Paula Deen, has received an answer from the network who aired her shows. They have confirmed that they won’t renew her contract.She had been working with the cable network for 11 years. Paula understands why the contract has ended. (Nobody appreciated her using the N-word. Therefore the network was left with no choice.) Paula went on by saying: “I have had the pleasure of being allowed into so many homes across the country, and meeting people who have shared with me the most touching, and personal stories. This would not have been possible without the Food Network. Thank you again. Love and best dishes to all of ya’ll.” So far it is not clear what Paula is going to do now. Perhaps, if she is really starved for work, she could appear on a Walking dead episode. Lots of Americans would love to see Deen ending up like a Zombie in that show, being hunted down, and probably meet a horrible, gory death. Apart from Deen 4 other candidates come to mind, how about…

Kim Kardashian: True that she just gave birth, and all. So we shouldn’t blame her for being in the “news,” but she is very annoying. Because who talks about eating the placenta of your new born, if your only concern are the television ratings? Who doesn’t baby proof their house, because the baby will not be moving around the house until she’s two years old. (Again this statement was made because Miss Kardashian does/say anything to keep the ratings up.) Kim could play the estranged daughter of Paula Deen, maybe Deen had taken Kim in as a refugee from the Zombie attacks, but alas they both won’t make it, and fall victim to these hungry Walking Dead attackers.

Kanye West: True he did just have a baby, albeit he didn’t push it out. He was just standing, presumably, in the room, and holding Miss Kardashians hand. Kanye is known for his flamboyant character, and confidence levels. (He should have been zombified just for the fact that he stole Taylor Swifts moment on stage. Not sure if the poor girl is still thinking about this incident, but it should warrant Kanye being eaten alive. At least on a Walking Dead episode.) Very interesting would be the interaction with Paula Deen, if they would appear together on the show. Will Paula feel differently about the word she used? Or do you think she will scold him for his strange song texts on his new album “Yeezus.”

Charles Saatchi: The husband of Paula Deen’s colleague over in Britain; TV chef Nigella Lawson. Charles deemed it appropriate the past week to manhandle the woman, not Paula but his wife NIgella, and to grab her throat repeatedly. Nigella looked horrified, and quite scared. However reports have surfaced that these things aren’t uncommon in their relationship, and that it usually clears up. However this behaviour shouldn’t be tolerated, not by any woman, famous or not. Therefore Saatchi should be choked, whacked, and have a gruesome ending on The Walking dead. (Funny thing they won’t have to invest that much money in changing his appearance.)

Superman: because we are tired of hearing about “The Man of Steel.” Sure the work outs were gruelling, the movie surprisingly good, and there were probably more positive aspects. However do we need to read about him the whole week? It would be great, regardless, to see a super hero on The Walking Dead. Maybe it could be a cross over.

What do you think? Which “famous” person deserves to be killed of in a gruesome scene on The Walking Dead?