Republican’s Fight To Protect Their Right To Control Womens Bodies 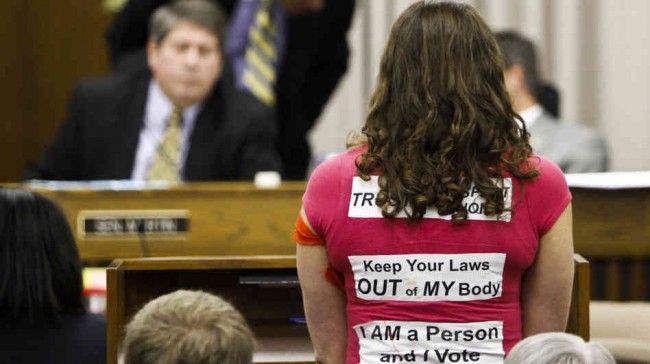 What happens when well-known leaders in the community willingly break the law? Their constituents respond in kind by relinquishing their support for that candidate and law. Women today, have not forgotten their right to control their own bodies despite the rhetoric of many Republican men in Congress who would like to do otherwise.

The Susan G. Komen Foundation, which prides itself on helping cancer patients fight for their lives, is now fighting to resuscitate its own life. BBC news reported that the foundation has experienced a drop in participation, in the thousands, within the past four years. In 2014, the road races the foundation usually host will be cut in the cities of Boston, Chicago, Cleveland, Tampa Bay, San Francisco, Washington D.C. and the state of Arizona.

The previous year’s blunder might well have been the straw that broke the camels back. In 2012, conspicuously in an election year, the foundation decided to suspend its funding for the renown family planning organization, Planned Parenthood–an organization that not only performs abortions (the sole reason many believed the organization succumb to pressure to stop funding) but also provides many family planning services for both men and women. In the firestorm that ensued, the foundation found itself having to go on many cable news networks to justify its mercurial decision. In the end, The Komen Foundation reversed its decision and stated they would continue to donate funds to Planned Parenthood.

But, many disenchanted participants in the Komen Foundation saw through the organizations transparent political maneuvering. “Komen spokeswoman Andrea Rader said the events had seen a 37% decline over the last four years but acknowledged that the drop was ‘a little more dramatic’ last year”, according to BBC News. Rader went on to say “the ‘vast majority’ of people had moved on from the controversy.”

But the numbers reveal that the republicans initiatives to control women’s bodies have failed. According to the Miami Herald, participation in the three-day events has declined 37 percent over the last four years, according to the group. And the representatives went on to say that they know many people will not return.

And rightfully so. The right to a woman’s choice hides behind all of this. And, behind this, not-so-secretly hides the desire of many men to hold onto the little power they have left in the twenty-first century to decide the fate of women’s bodies. Here lies the festering wound of the problem. “The bill (which originally only applied to D.C) if it were to become law, which seems unlikely, it would now apply nationwide”, stated the Atlantic Wire.

Rep. Trent “Franks’s bill is called thePain-Capable Unborn Child Protection Act, and is similar to a state law in Franks’s home state of Arizona, t. It would ban abortions after 20 weeks, with exceptions only if the mother’s life is in danger. In other words, later-term abortions for pregnancies resulting from incest, rape, and those that could pose significant (but non-lethal) health threats to the mother would be outlawed. The percentage of abortions affected in the country by the bill would be tiny”, says the Atlantic Wire . The bill “would change the constitutional standard for determining the legality of abortions. , the cut-off point of 20 weeks is based on what’s called the fetal pain standard, which relies on a scientifically claim that fetuses can feel pain at that point. That’s against the precedent set by the Supreme Court, which has ruled that abortions are legal so long as the fetus isn’t “viable,” which is usually around 24 weeks. Any law like Franks’s would, by going against that precedent, likely see a swift challenge in court, which is exactly what anti-abortion opponents are hoping for.”

The bill is essentially about taking back control of women’s bodies, from women, and placing it back in the hands of men. But, many men and women today have seen this show many times before and have not been fooled. The bill is unlikely to pass, although republicans persistently try; but foremost, the former participants in the Komens foundation road-race have unearthed the intentions behind their old beloved charity and have decided to use their moral compass and ditch the foundation.

Republican’s have lost another battle to re-impose old patriarchial norms onto the bodies of women.
Read more here: miamiherald, bbc.co.uk