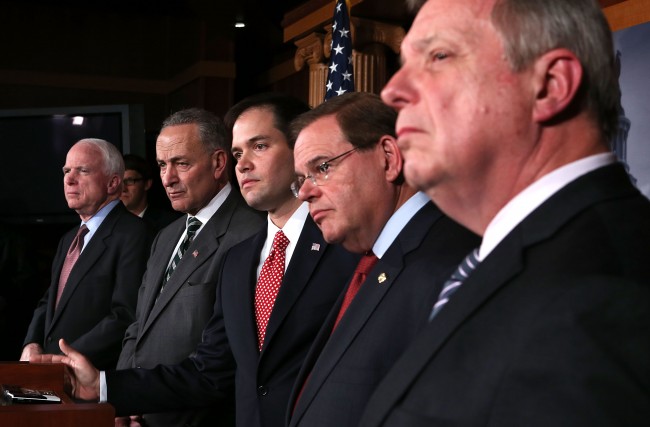 The Republican Party respects the Hispanic vote and it will determine public policy actions concerning immigration. Since the 2012 elections, Republicans had to come to the realization that the country’s demographics had shifted away from the GOP’s traditional base of older, white voters. The Republican Party has become split on the issue and internal turmoil continues to unfold in the eyes of the media.

The GOP has made a concerted effort to work the immigration angle to secure a Hispanic voting base. The Republican National Committee endorsed Immigration reform in its “party autopsy” commissioned after the 2012 elections: The GOP “must embrace and champion comprehensive immigration reform. If we do not, our party’s appeal will continue to shrink to its core constituencies only.”

William Kristol, the editor of the Weekly Standard, believes the Senate bill is a bad bill. Rich Lowry, the editor of the National Review, denounced the immigration reform plan. In a joint editorial the two wrote that the plan was full of loopholes and exceptions. They suggested that the GOP should not push the bill through but instead wait until after the 2014 elections. One chief Republican believes the Hispanic vote will not determine public policy for the party because they’re not the key voting bloc.

Rush Limbaugh puts forth the argument that Hispanics as a voting bloc, are temperamentally in line with the Democrats. If an immigration law is passed it does not necessarily mean that the Republican Party will win over an increased Hispanic voting base. Sean Trende of RealClearpolitcs, suggests that Hispanics aren’t the key voting bloc for the GOP in winning a presidential coalition. Critics are of the opinion that the GOP is overlooking courting lower-income whites whom could be mobilized into a progressive voting bloc.

“When people see a party that is not rational they’re not going to go with that part,” said Arizona Sen. Jeff Flake. The internal turmoil was exasperated when it was noted that Rep. Tom Tancredo of Colorado had publicly bashed immigrants for years. During the 2012 primary, Mitt Romney and Rick Perry dueled over the issue in public forums. Alaskan Rep. Don Young referred to Latino farm workers as “wetbacks”.

Pro-reform Republicans feel that unresolved immigration issues will have an effect on the party for years to come. Critics are of the opinion that the immigration bill in its current state will do little or nothing in resolving the illegal immigration issue. The bill was assembled in response to a panic to scramble for Hispanic voters. Many suggest that if the GOP wait, take control of the Senate in 2014, they can pass a more conservative version of immigration reform in 2015.

“Republicans are in a demographic death spiral as a party and the only way we can get back in good graces with the Hispanic community, in my view, is to pass comprehensive immigration reform,” said South Carolina Sen. Lindsey Graham. The Hispanic vote is an appealing bloc for the Republican Party and it will determine public policy arguments in the coming elections.