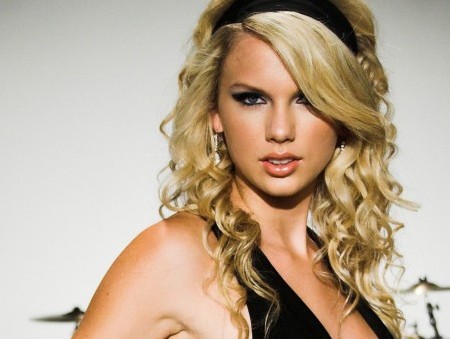 Taylor Swift is very happy that MTV have put her up for two VMA nominations. The singer got onto her Twitter account and tweeted: “Two VMA nominations!! If you vote and get us one, I promise to keep a firmer grip on the mic this time ;)” She apparently hasn’t forgotten when Kanye West wrested her microphone away to rant about Beyonce Knowles not winning in 2009. An audio recording of an alleged West rant all about Swift (and others) shows that he hasn’t forgotten incident either and who he is and what he believes.

People still remember when Taylor Swift got her mic and her award taken from her, by West, while she was in the middle of her acceptance speech on the MTV Music Awards back in 2009. And if they had started to forget about it, the website Gawker.com has decided to help remind everyone of the event.

Gawker.com have gotten hold of an alleged Kanye West rant at the Corner Bistro in Manhattan’s West Village that was made some time after the “incident” with Swift back in 2009. The voice on the audio recording is claimed to be West’s and he lets the rage fly towards the artists that he feels are not his equal. Swift and Pink, specifically and then he goes on to rank on the music industry.

The “alleged Kanye West” says: “I was happy to be in a situation where people couldn’t say, oh, I was trying to promote my own song. For the times that I’ve, like, defended myself… I’m pushing the envelope! I wrote my f****n’ ‘Run This Town’ verse for a f***in’ month! When I heard Eminem’s verse on the Drake s**t, I went back and rewrote my s**t for two days! I canceled appointments to rewrite! I fu**in’ care! You know what I’m saying? And that’s what I’m saying. Because I did that, Taylor Swift cannot win over Beyoncé! Because I wrote my verse in two days, Taylor Swift cannot beat Beyoncé.”

The voice of “Kanye West” then goes on to talk about racial issues with the statement that “there ain’t gonna be no more motherf*****g Elvises with no James Browns.”

Before the supposed West goes on to blast Pink and her performances on the 2009 MTV Music Awards show, he talks about his late mother Donda West who died in 2007 because of problems that developed with her liposuction. The man says that she, “died for this fame shit! I moved to f**kin’ Hollywood chasing this shit. My mother died because of this shit. F**k MTV.”

It isn’t known if the voice on the audio recording is actually that of Kanye West, as Gawker.com claim, but West does have an ego problem. It’s too big for just one man. A performer who has called himself “God” and how has proclaimed proudly that “ego is my drug” is lucky that he’s living in the year 2013. In the 1960s when The Beatles John Lennon implied that the fab four were more popular than Jesus, it caused an uproar. In this, somewhat “enlightened” age, no one has blinked at West’s claims of holy divination.

But the recording of the alleged Kanye West still slamming Taylor Swift, as well as Pink, shows that the Yeezus performer hasn’t forgotten who he is and what he stands for, assuming that he still feels the same, four years later. And why wouldn’t he, his ego has gotten bigger since then.

The recording reveals that “West” wasn’t happy about Pink’s choice of songs and the fact that she got to perform twice. Rather tellingly, West didn’t “take-on” Pink in front of everyone. Quite possibly because he knew that she wouldn’t put up with it. Pink is a tough customer and West knew it.

But Taylor Swift won’t be such a pushover this year as her tweet shows, she may just hold onto that microphone a little harder and place the award (if she wins one) somewhere other than in West’s hand.

But whether the recording of Kanye West alleged ranting is real or not, it doesn’t matter. The public has gotten used to his ego-fueled antics and bizarre behaviour. Like telling a paparazzi cameraman who happened to be a “fan” that he shouldn’t talk to him, or anyone he knows. Kanye then went on to tell the cameraman that nobody should talk to him (West) or even talk to each other.

We don’t think so and neither did the cameraman. It’s just Kanye West doing what he does best, flexing that massive ego of his and not caring what anyone thinks about it. It’s not hurt his record sales in the least. He still manages to keep laying hot tracks that make his fans forget about his bizarre behaviour and his too large ego.

The expletive filled rant may have been recorded back in 2009, but we don’t think it really matters, if it really is the 38 year-old rapper on the recording, he’s not mellowed in his opinions of his own self-worth or how great he is compared to other artists in the industry.

All we can say is, if Kanye West goes to the MTV Music Awards this year, Taylor Swift better keep a real tight grip on her mic. West hasn’t forgotten how he feels about both Swift and Pink if the rant is anything to go by. Sure it was made back in 2009, but when your Yeezus, time doesn’t matter.