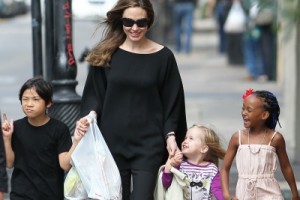 Angelina Jolie appeared at Disney’s D23 Expo to promote the upcoming film “Maleficent,” in which she plays the star role as the Sleeping Beauty villainess. Even bigger news is that Jolie’s daughter, Vivienne, will appear as co-star in the Disney film as Princess Aurora.

The Washington Post reports that the young star, Vivienne, won the role “mostly because she was the only child who was not afraid of Jolie in her horned attire on the set.” Jolie remarks, “Vivienne was the only 4-year-old who wouldn’t scream.” Jolie also shared events that happened on set. She revealed that while thinking about being a Disney character, when she went to speak to some of the children visiting the set, they would scream and run off. Jolie reports one child even said, “Mommy, please tell the mean witch to stop talking to me.” She has not lost sleep over the events, as she is elated that the two “…got to be part of it together.” To add to this surprise, Vivienne’s siblings, Pax, 8, and Zahara, 7, also have walk-on roles in the movie. Although Vivienne was not at the day’s events, Jolie mentioned that Pax and Zahara were not far away. “They are actually playing in the park now,” she disclosed, speaking of the Disneyland theme park located across the street.

She was not only excited to be sharing the film set with her daughter and other children, but she was excited about the opportunity to be joining hands with Disney, as well. “It feels very special to be a part of this family,” she said.

Jolie was especially fond of the horns she wore as Maleficent. Director Robert Stromberg commented to PEOPLE, “She loved wearing those horns. After a while it felt very strange to see her without them, like part of her was missing.” Jolie agreed. “I miss them. I love them.”

Relaxed and out of the Maleficent attire that included horns, offset by glowing eyes, dangerously sharp cheekbones, and ruby red lips, Jolie shared some private moments at the event, wearing a black Versace top and black Saint Laurent pants and shoes. “Since I was a little girl, Maleficent was always my favorite. I was terrified of her, but I was always drawn to her,” she told the crowd. “She had this elegance and grace, and yet she was so cruel; just wonderfully and deliciously cruel.”

The real thanks goes to Jolie’s brother, James Haven, whom without, this would not be possible. He called her when he found out they were making the movie and pushed her to go after the part.