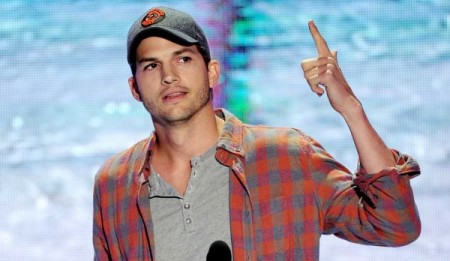 Ashton Kutcher says he feels like a fraud. Ashton isn’t even his first name. He was born Christopher Ashton Kutcher. He dropped the name Chris when he became an actor at the age of 19. He said in Hollywood there are many inside secrets that you have to flow with in order to get established and then keep your career moving upward. He’s very grateful for all that he’s done as Ashton but says there was some amazing principles that he learned when he was simply Chris that have shaped him into the man he is today.

Kutcher explained that there are three basic ideologies that fashioned him. He then took the opportunity to share a condensed translation of them: Opportunity, Being Sexy and Building a life.

Kutcher says he’s convinced that opportunity resembles hard work. At the tender age of 13, Kutcher, started working with his father who was a roofer. No, he wasn’t up on the roof nailing panels, but he assisted by carrying materials up to the roof for his father. Then he took a job at a restaurant, not as the head server, but as a dish washer.

Kutcher then started working at a grocery store deli. After that job he began working in a factory sweeping dust off the floor. He said that he never felt like he was too good for a job or that one was beneath him. He was just fortunate to have one. Because he understood that opportunities come in the form of work, he never left one job until he had secured another.

He then went on to talk about being sexy. To Kutcher being sexy is not the superficial junk that society wants people to believe. In the words of Kutcher, sexy simply means being very smart, incredibly thoughtful and extremely generous. He goes on to emphatically say that all that other stuff that society implies is ‘crap.’ Don’t buy into it; rather focus on being smart, thoughtful and generous.

The last principle that he shared, he didn’t actually learn as Chris, but more recently when he started working on his latest role as Steve Jobs. According to Jobs, as people are growing up they are usually taught that the world is the way it is; nothing more and nothing less. The main goal for society is to live life inside the world without getting into too much trouble. Try and get an education so that they can find a job, make money and ultimately have a family. But life has the opportunity to extend so much farther than that- when people realize one simple thing and that is: everything that people consider ‘life’ which surrounds them, was created by other folk just like them. Life as people know it was created by others that were no more intelligent than the next person.

His final thought was that people shouldn’t sell themselves short by ‘just’ living life. Kutcher said people should not live life but build life. In other words, everyone possesses the same capabilities to build their own thing; to build or create a life that other people can live in.

Ashton Kutcher may be a Hollywood star today but was once a young man named Chris. If Ashton hadn’t learned and governed his life by principles he learned early on as Chris, the life he now lives would not have been possible.

He took time, on the Teen Choice Awards, to share these amazing principles to the world. He could have used that platform to publicly thank all the people he’s undoubtedly thanked already, but instead he opted to share how fraudulent using the name ‘Ashton’ makes him feel when he’s really a guy named Chris.