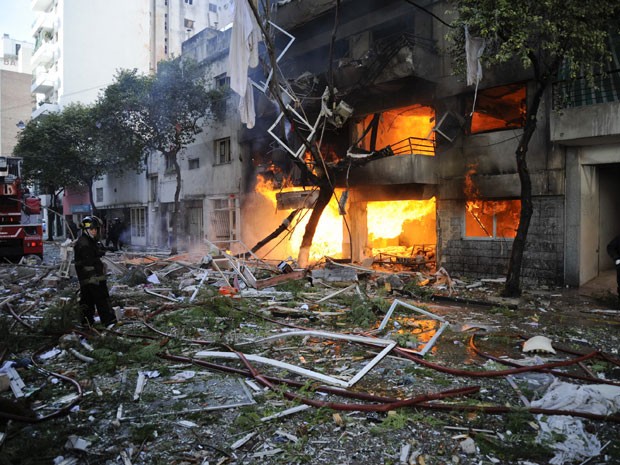 Tuesday, a powerful explosion in an apartment complex in Rosario, Argentina, killed at least 8 and injured more than 60 other people.

Some residents still remain trapped on the upper floors. Emergency teams are working right now trying to rescue them.

They have to proceed carefully, though, because there is a danger that the apartment block will collapse due to the explosion and subsequent fire. Nearby buildings have also been damaged, and some have had their windows blown out.

According to Rosario city mayor Monica Fein, the explosion was caused by a gas leak in the heating system.

The whole front wing of the [10-storey] building collapsed with the impact.”

The destruction was widespread. In two adjacent blocks, more than 50 apartments have been totally destroyed.

In these heavily desolated areas, rescue personnel are digging through the rubble to try to find survivors.

According to witnesses, the blast could be heard several kilometers away. The explosion occurred just before 10:00 local time.

I was in the bath when the explosion took place and the ceiling fell over my head. I have lost everything.”

Evangelina stated the accident in the Salta street apartment block may well be linked to problems with the gas system.

Two weekends ago, someone tried to rob the gas meter. A gas engineer was due to come to fix it today, so we were informed the gas was going to be cut off between 09:00 and 14:00.”

This is the time to make a proper assessment so we can take a decision. Someone must be accountable for this.”

Bonfatti described the accident as “a black page in the city’s history”.

Rosario, which is also the birthplace of Barcelona football star Lionel Messi, is Argentina’s third largest city, after Buenos Aires and Cordoba.

Dozens of people were trapped in the upper floors of the burning building as a huge plume of smoke went up over the country’s third-largest city. The building’s front and back facades were ripped open, exposing the shattered remains of apartments inside.

Firefighters working from above and below pulled people out of windows and off balconies as the bottom floors burned. The explosion damaged other buildings for blocks around. Fearing a collapse, police have closed buildings and schools in a five-block radius.

Officials say that 19 people are still unaccounted for.

The Litoral Gas company cut off gas flow to much of downtown until they can figure out what caused the leak and repair it so that no further accidents will occur.