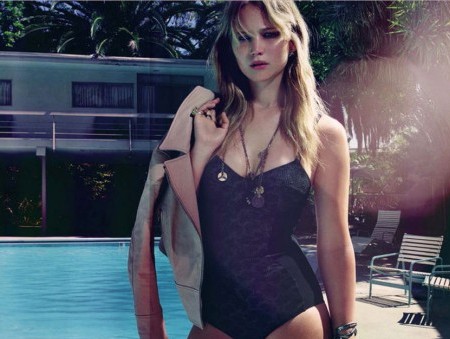 Jennifer Lawrence is on the September cover of Vogue magazine, which has just hit the shops, and she looks like what she is, a star. Her interview for the magazine is very revealing as Jennifer tells it like it is. She is well known for being unaffected and straight talking. So when she reveals what sounds suspiciously like a sponge fetish, it doesn’t really surprise.

Lawrence has got quite a number of films under her metaphorical belt now and she has an Academy Award for her role in Silver Linings Playbook. Her star is still on the rise. It is her sense of humour that is combined with her “girl-next-door,” image, with a slight earthy edge; Like when she revealed that she enjoyed going for a pee in the ocean in her film costume, that makes her so appealing.

On top of the slew of popular films that 22 year-old film star has several videos that can only be referred to as viral. Some of her most endearing moments have been caught in these “compilation” videos and these have only served to increase her fan base.

So when the down-to-earth actress reveals in the Vogue magazine interview that she is having trouble dealing with her fame, it isn’t too surprising. Although when Jennifer Lawrence revealed her apparent sponge fetish, we were taken back a little.

In her interview with Vogue’s Jonathan Van Meter, who reckons that Jennifer “has the soul of a comedian,” she lays it all on the line about what makes being a superstar difficult.

She revealed to Van Meter that she sometimes feels uncomfortable with all the attention. She said, “I’m just really starting to feel like a monkey in a zoo. I teeter on seeming ungrateful when I talk about this, but I’m kind of going through a meltdown about it lately. All of a sudden the entire world feels entitled to know everything about me, including what I’m doing on my weekends when I’m spending time with my nephew. And I don’t have the right to say, ‘I’m with my family.’”

Jennifer also revealed that, she probably will not ever get used to it. She told Van Meter, “I am just not OK with it,” she says. “It’s as simple as that. I am just a normal girl and a human being, and I haven’t been in this long enough to feel like this is my new normal. I’m not going to find peace with it.”

Jennifer also revealed that it was never her plan to be an actress. She says that in her mind her future would be consist of becoming a doctor. Although, she says, she was going to be a famous one. If not a famous doctor, then at least a famous person. She said, “I used to lie in bed and wonder, Am I going to be a local TV person? Am I going to a motivational speaker? It wasn’t a vision. But as it’s kind of happening, you have this buried understanding: Of course.”

She also reveals that she wasn’t a good student and that she had a lot of anxiety as a child. She actually suffered so badly, that her parents sent her to a therapist. But none of these things, bad grades and too much anxiety mattered after she found acting. Once she started acting at the age of 15, she didn’t need a therapist any longer.

But about those sponges. This was the part of her interview that convinced Van Meter that Jennifer has the soul of a comedian. She explained that she has a thing, or a fetish if you will, about new sponges. She said, “I wake up earlier in the morning when I have new sponges. That counter doesn’t even see it coming…”

In fact, it was her “special” feeling about sponges that helped her to figure out that her romance with Nicholas Hoult was doomed. According to her, Hoult “would never wring them out. We were in the kitchen once, and I picked up the sponge, and it was soapy and wet, and I was like, ‘See? These are the kinds of things that make me think we are never going to work.'”

So not only does Jennifer Lawrence look like the star she is on the Vogue magazine cover, but her revelations in the Jonathan Van Meter interview, including her sponge “fetish,” just make us love this unaffected, down-to-earth girl all the more. You can pick up the September issue of Vogue at shops now.