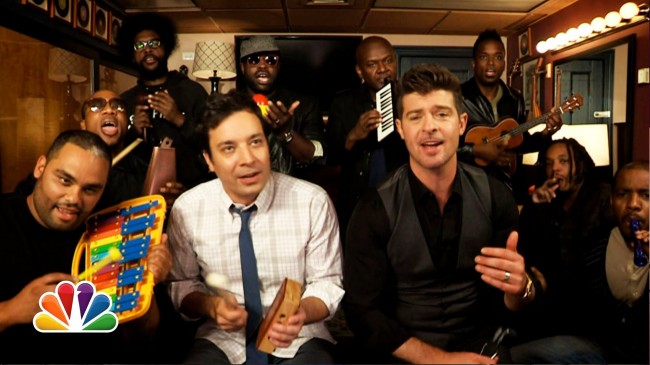 It was one of the most talked-about topics around water coolers,  and on the Internet, today.

One of the reasons why — other than it sounded great, and showcased Fallon’s creative song parodying skills — is that the musical instruments used by Fallon and The Roots were the type that can be found in elementary school music rooms.

Because of this, and a few alterations to the controversial lyrics, some people in the media world say things like the song has been given a “kiddie spin.” I, for one, don’t know about that, but I do know that the version they performed was awesome!  You can see it for yourselves below, and please make sure that you Like the page, while you’re at it.

What were the musical instruments that Fallon and The Roots played on the G-rated version  of Blurred Lines?

Every time I hear Blurred Lines I’m reminded of the music of Prince, because Thicke gets his voice up into the falsetto range kind of like Prince. However, according to Thicke, Blurred Lines is actually inspired by the music of Marvin Gaye. Pharrell produced the  video.

In a Today Show appearance, Robin defended his lyrics by saying that the song is really about his wife and how she’s hot, adventuresome in bed, and aggressive sexually. Also, rather than the lyrics degrading women, Thicke claims if the lyrics are looked at closely, people will see that the message of the song has been “misconstrued.”

According to Robin Thicke:

“If you listen to the lyrics, they say ‘that man is not your maker, Thicke added. “It’s actually a feminist movement in itself.”

All I can say about it is it’s a great party song, and it’s received so much airplay despite its lyrics that it has attained the coveted #1 spot on the Billboard Hot 100 List.

Whether you love Blurred Lines or hate it, you owe it to yourselves to check out the video belwo of Jimmy Fallon and Robin Thicke performing the song using Elementary school musical instruments. It will put a smile upon your face!