Neil Armstrong is Remembered a Year After Death

By Iam Bloom on August 24, 2013Comments Off on Neil Armstrong is Remembered a Year After Death 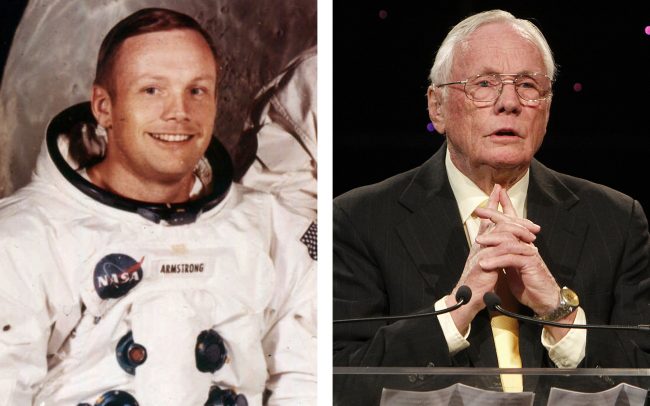 Aug. 25th 2013, one year after the death of astronaut Neil Armstrong, the man is remembered.

One year ago today the first man on the moon, Neil Armstrong, died at the age of 82. Today NASA and space.com honor the memory of this incredibly humble man with comments by his autobiographer, James Hanson, and a music video by Eric Brace entitled Tranquility Base.

While the world knows him as the famous astronaut and his amazing journey to the surface of the moon on July 20, 1969, few people are aware of the man before and after this historic moment. After the moon landing, Armstrong became something of a recluse from the public eye refusing interviews or public engagement for the remainder of his life.

It wasn’t until 2002 when Armstrong reached out to Hanson to write his biography, that he again addressed the world in the form of his life story. Hanson suspects that Armstrong turned to him, a history professor at Auburn University, because of their shared background and customs. Both men from the midwest and grew up in farming families of humble beginnings. There was a depth of commonality that seemed to allow Armstrong to open up to a man he knew wouldn’t sensationalize his life.

“All his life, in whatever he did, Neil personified the essential qualities and core values of a superlative human being,” Hanson wrote for space.com. “Don’t just ask his fellow astronauts; ask his naval aviator crewmates in Fighter Squadron 51, where as a young man barely 20 years old, he not only flew 78 combat missions over North Korea, but showed extraordinary levels of commitment, dedication, dependability, a thirst for knowledge, self-confidence, toughness, decisiveness, honesty, innovation, loyalty, positive attitude, self-respect, respect for others, integrity, self-reliance, prudence, judiciousness and much more.”

A beautiful tribute to a man who found himself on the stage of history, yet never losing sight of being a pilot, an engineer, and a human being no better or worse than any other. Humble in a way that we talk about and wish to emulate. His ‘quite’ life after the moon landing missions did not mean a life in seclusion. Armstrong was a very active man, but avoided the spotlight for the reverence he had for what was accomplished back in the summer of 1969.

The video released today by Eric Brace, produced by Red Beet Records, called Tranquility Base was originally composed for the 40th anniversary of the Apollo 11 moon mission. However, the song is more a tribute to Armstrong and his life and the video reflects that as he is remembered today.

Remembering Neil Armstrong is as much about the man as it is about the dream, drive, and ingenuity of the human spirit. We as a nation and a planet came together to witness the walking of a human being on a different heavenly body. Whatever may or may not have been going on that day, the world stopped and came together as one. Perhaps today can spur some of that unity and oneness that was created then, as we remember Neil Armstrong a year after his death.

Neil Armstrong is Remembered a Year After Death added by Iam Bloom on August 24, 2013
View all posts by Iam Bloom →