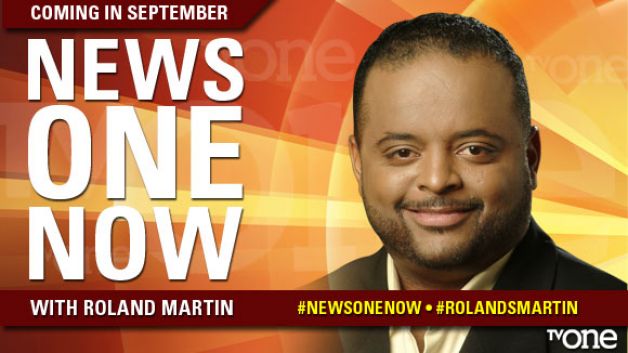 Roland Martin, the former CNN contributor and current Tom Joyner Morning Show reporter, says seldom is anything just black and white and definitely not news. He says his new morning show entitled, “News One Now” will give people the diversity they deserve when it comes to current affairs.

Martin, the 2013 National Association of Black Journalists’ Journalist of the Year, is known for being the “no holds barred” journalist/reporter. He hosts a syndicated radio show with plans to debut his new televised show on TV One’s network next month.

Martin says he wants to change the news. “Too many news shows today break down the debate and issues by the political affiliations,’’ said Martin. “It’s mostly about Democrats vs. Republicans ideals and I think, I know rather, a lot gets lost when it is limited to just those two points of views.”News One Now will include a Skype Net, which will allow all Radio One hosts the opportunity to weigh in on the news of the week.

The D.C. based reporter says too often news programs just want the variance of conflict that opposite opinions tend to bring. “It makes for good television some might think, but are any true resolutions discovered when that is the only platform?” asked Martin.

According to Martin, real and in-depth news about African Americans issues tend to get lost in the hype of the ongoing news cycle.

“Take the Trayvon Martin case. So much of that conversation was reduced to right wing and left wing ideas and opinions on what happened to that young man when there were so many different ways of covering the issue. The Stand Your Ground law can be discussed for years to come as can the discussion of how we educate and value our young black men. Those are issues that have to be discussed at length in the media. They aren’t over because the George Zimmerman trial is over,” says Martin.

When Martin was employed by CNN he felt that there existed a lack of diverse perspective when addressing certain news stories or when panel discussions were being held. He goes on to express that if there wasn’t someone black on the program, the other side of story would get no attention. In other words, a different thought process or another viewpoint would be completely missing from the conversation. “When diversity is lacking, so much falls through the cracks in terms of what is offered to the viewing audience to think about. My show will fill some of that void I hope,’’ says Martin.

Martin has spent the better of his career intensely focused on the issues facing African-Americans. He previously served as editor of the Chicago Defender, the only historically black newspaper of Chicago, and heavily influenced the politically charged news show, “Washington Watch”, on TV One until earlier this year.

“African- Americans are some of the most highly engaged cable news consumers, and it’s vital that we meet that thirst with a daily morning shows that speaks to our issues, our concerns, from our perspective,” said Martin.

Martin also said that he feels the show, “Don’t Sleep” with former CNN host T. J. Holmes was cancelled prematurely. He says these types of shows need time to really thrive and gain support. He realizes that network executives want instant results with instant ratings. It’s just business and he says he understands that.

Martin says his new morning show News One Now will give people the diversity they deserve when it comes to current affairs. His show will air on the TV One network as well as radio and which will result in a three hour long show.