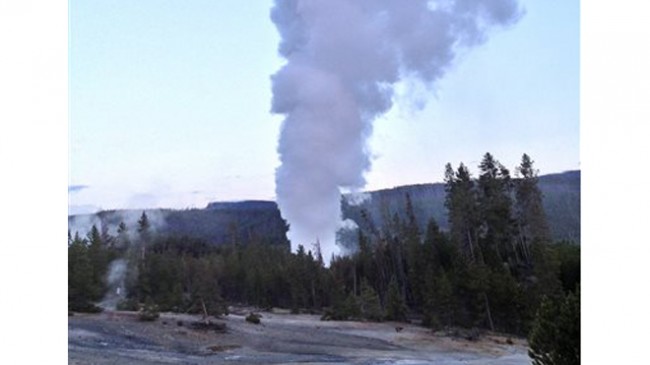 On Wednesday, Steamboat Geyser in Yellowstone National Park erupted for the first time in more than 8 years. Unlike Old Faithful, it erupts at irregular times, sometimes erupting several  times a year, and sometimes waiting years between such displays, as it did this Thursday.

The blast lasted approximately nine minutes and blasted steaming hot water some 200-300 feet in the air, according to park geologist Hank Hessler. Old Faithful, in comparison, erupts on  a fairly regular basis, 91 minutes after a blast longer than two-and-a-half minute blast, or 65 minutes after a blast shorter than two-and-a-half minutes, and has been called the most predictable geographical feature on Earth.

Once, the Steamboat Geyser went as long as 50 years, lying dormant between 1911 and 1961, before finally erupting. However, in the eventful year of 1964, it erupted a record 29 times. Previous to Wednesday’s blast,  Steamboat Geyser’s last eruption was way back in 2005.

Altogether, there are more than 500 geysers in Yellowstone National Park. It has the largest collection of geysers and other hydrothermal features of anywhere else in the world.

Steamboat Geyser is located in a part of Yellowstone known as Norris Geyser Basin. The  geyser erupted at about 7:30 p.m. Wednesday night, much to the pleasure of dozens of onlookers. Robb Long, a freelance photographer, was one of them,  visiting the park from Sioux Falls, S.D., with his fiance and her family.

It was an amazing experience. This thing sounded like a locomotive, Everybody was frantic, taking pictures. People were running down there trying to get to it before it went away, and park rangers were running around trying to gather up people so they didn’t get too close.”

Cold water, according to park geologist Hank Heasler, fuels the entire system of eruptions. It feeds into a network of naturally occurring tunnels underneath the park where heat from Yellowstone’s volcano forces water to the surface and causes the periodic eruptions of the geysers.

Geysers are, to put it another way, hot springs that are characterized by their intermittent eruptions of water and steam. They are among Earth’s rarest natural phenomena. Geologic conditions, like hot springs and volcanoes, must be present for geysers to exist.

The first early account of Steamboat Geyser erupting was a first-hand one, recorded in 1878. The park has used electronic monitors since 2005 to more closely track the geyser.

Steamboat Geyser is both the world’s tallest and least reliable geyser.

According to park officials, only about 30 to 40 people saw Wednesday’s eruption. They reported hearing a roar and feeling the ground shake before the eruption.

Wednesday, Steamboat Geyser in Yellowstone National Park erupted for the first time in more than 8 years, Whenever the next eruption might be is anyone’s guess.