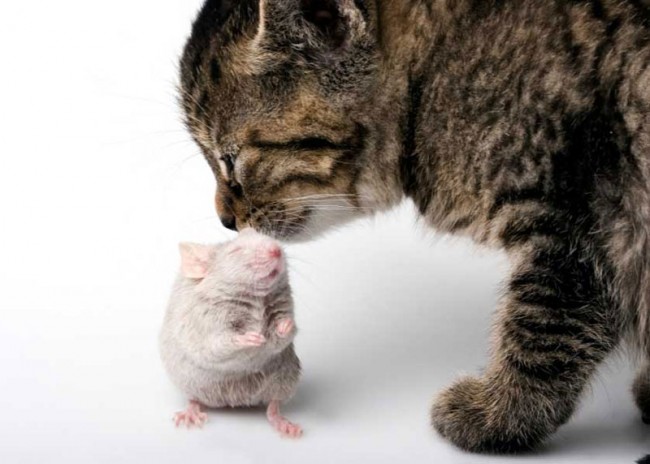 Cats know how to make us love them. But it seems that they know more than that. Even mice fall for cats sometimes. Not for their charm, of course, but for toxoplasma gondii – an enigmatic parasite that easily turns these little gray rodents into cat lovers. Infected by toxoplasma gondii, a little mouse instantly changes into fearless Jerry. But unlike the animated hero, it easily becomes a prey to the gracious domesticated predator.

Toxoplasma gondii (T.gondii) is a parasite known to man since the beginning of the twentieth century. It affects about one thirds of the human population, and mostly all warm blooded animals. But two things turn T.gondii – cat relationships into very useful symbiosis. In a cat’s intestines this parasite can mature and reproduce. In the infected mice, T. gondii affects their brains in such a way that the rodent gives up its basic instinct – fear of cat’s urine smell. They start to even like it; and instead of running from it they run towards it, figuratively speaking, right into a cat’s open mouth.

New light on the complicated effect T.gondii has over a rodent’s brain was shed by a recent study conducted at the University of California – Berkeley. Researchers found that mice and rats infected by a cat’s urine, in less than three weeks, lose their fear of feline urine. Even when treated, they keep the same dangerous symptoms long after the infection is cured.

“Even when parasites [are] cleared and [are] no longer in the brains of the animals, some kind of permanent long-term behavior change… [occurs], even though we don’t know what the actual mechanism is,” said Wendy Ingram, the leading expert of the study.

Rodents are not the only animals affected by this cat loving parasite, yet, they suffer in the most unique way. T.gondii is widely spread among all mammals and birds, and even people.  About one third of the human population is infected, and while it is almost unnoticeable by healthy adults, people with a weakened immune system might suffer.

Our love for cats is hopefully not caused by the T.gondii parasite. Nevertheless, it can affect us in bad ways. T.gondii is linked to some neurological disorders like schizophrenia or bipolar disorder, but it’s most dangerous to pregnant women, especially if they love cats. Cats litter is among the most risky sources of infestation. And if your cat has even once eaten an infected mouse, it is almost certain to be infected as well.

When a cat eats a sick mouse, T.gondii starts reproducing in the cat’s intestines, shedding oocysts in the feces and spreads by infesting soil, water, food or anything that comes in touch with the cat’s poop. That’s why pregnant women should not clean a cat’s litter.

Around 70 million cats live in American homes, so dealing with a cat’s litter box is inevitable for many of us, and should be done with care. It is recommended that a cat owner should clean the litter regularly since oocysts will take an entire day to develop. The more often you clean up a cat’s litter, the less likely you’ll have parasite infestation. Don’t forget to wear gloves, and wear them not only when you change litter, but when you work in the garden as well, since soil or sand may also be infected.  Wash your hands in hot water with soap if you think you might be infected. Keeping your charming cat indoors can also help because this way you will be controlling its diet.

Under-cooked meat is another source of T.gondii infection. According to researchers, it should be avoided. And don’t feed your cat any steak unless it’s well done. Even unpasteurized milk may contain this parasite, as well as unwashed fruits and vegetables.

It is easy to control your food sources by simply peeling vegetables and fruits, and grilling your steaks until they are well done.  It is much more difficult to control affectionate feelings toward our fluffy purring free spirited friends that like to eat from our tables and share our beds.

Please remember that their charming behavior might easily turn you into a host  infected with toxoplasma gondii parasites. Be aware, and don’t lose your mind because mice pay their lives for doing it.

Anyway, who really knows the answer to the question, why do we love cats?