"I Have No Regrets" 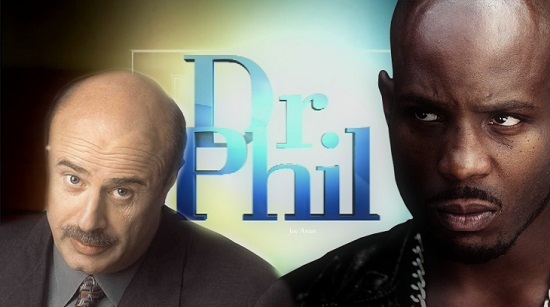 DMX took to The Dr. Phil Show to explain who he really is and to clear up the sound bites that the world has identified him by. He said people are always hearing snippets of what he’s doing wrong but they really haven’t had the opportunity to know the real Earl ‘DMX’ Simmons.

DMX stated that he didn’t want the producers to bring anyone else from his family on the show. He said that he got off to a rough start in life but his mom did the best she could and they now have a good relationship. He said he didn’t want anything or anyone to mess that up. He also said that his ex-wife is a good woman; they now have a good relationship and he would never say anything bad about her. He didn’t want either of them on the show and wanted no questions about them. Dr. Phil said he respected that.

DMX said he was advised not to do the interview with Dr. Phil or be on his show because he falls under the Iyanla and Oprah umbrella. Dr. Phil asked him why he agreed to do the show and he said he wanted people to know who he really is. People get a better understanding when they can look into a person’s eyes when they’re talking. He wanted to give people the opportunity to see the real him.

DMX said he has 11 kids and one on the way. He said he doesn’t regret having so many kids because he can’t picture his life without any of them. DMX said he looks into their eyes and knows they belong here. He said he doesn’t feel like having a lot of children is a problem as long as they are taken care of. He does have a lot of kids but he says he takes care of them all.

They suspended his license and confiscated his passport and as a result have limited the work he can do because he can’t travel like he needs to. So again he asked, “How can I pay all that much in child support when I can’t work?”

He laughed about the hallway incident and said he ran through the hallway naked because he it was a dare. He was dared and he did; that simple, nothing more and nothing less. Dr. Phil asked if he thought that was a good idea and he said it wasn’t good or bad it was just a dare. That’s it.

DMX said he started drugs at the age of eight. A family member gave him some weed and it made him feel like he had never felt before. He began doing crack at age 14. He felt cocaine trapped him and then created a monster.

He didn’t realize that he really had a drug problem until he was around 19-years-old. He says he’ll always be an addict but he won’t always use drugs; although he maintains that he likes weed because it enhances his creativity.

DMX said his faith in God is helping him with his addiction. He taking steps every day to get better but God isn’t going to take all of it away at the same time. He added he’s not worried because he knows God has a plan for him.

He said his first stent in jail was at age 14, but he was institutionalized long before that by being in group homes. He’s been arrested at least 25 times between 1994 and 2013 but says he likes his freedom so he’s going to try and stay free.

DMX said he wouldn’t change anything he’s ever done because it was supposed to happen; every aspect of his life has gone as planned because it got him to the point he is today. Dr. Phil attempted to challenge his thought process but DMX quickly responded that it doesn’t have to make sense to Dr. Phil or anyone else. It makes sense to him and that’s all that matters.

He said he used to blame himself for things that were outside of his control. But he now has learned to love himself and doesn’t do that anymore. In addition DMX stated that had to start accepting responsibility for the things he did control and work hard to make the necessary changes.

His music producer and best friend, Grease, was in the audience. Grease said he’s very worried about “X” as he calls him. They have known each other over 20 years and are best friends. He wants his friend to go from being a wild fire to a controlled fire. He said “X” is an habitual drug user and he needs to work on it and on his relationship with his kids. He said change needs to happen right now.

DMX refused to answer direct questions from the twitter feed while on the show. He said he doesn’t waste time responding to people he doesn’t even know. It doesn’t matter what they think about him. He gets enough love from the people who know him; so whatever people don’t know about him they won’t know. He’s fine and moving on.

Dr. Phil asked why he was so defensive and he responded by saying he has a good heart and has to protect it.

Of course, he couldn’t leave before dropping a few lines from one of his popular hits entitled, “Lord, Give Me a Sign.”

DMX concluded the interview with one last thought which he directed to the audience; “If there are any Christians or prayer warriors in the house please pray for me.” He and Dr. Phil ended the interview on a good note and with a firm embrace.