Dumb and Dumber To Set Jennifer Lawrence in Cameo Role 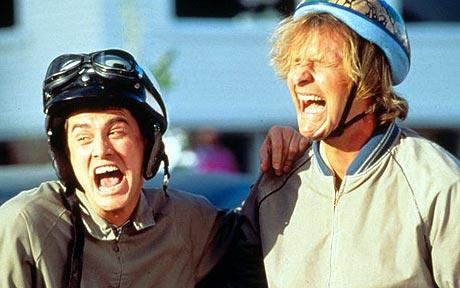 Dumber and Dumber To is making waves on set as Jennifer Lawrence is starring in a cameo appearance with the latest comedy. Lawrence is making her debut in the comedy scene as she joins Jim Carrey and Jeff Daniels. The 23 year old Oscar winner has been confirmed to take on the role of a younger Frieda Felcher, Kathleen Turner’s character. One day of filming with Lawrence has taken place at the set in Atlantic, rumoured to be close to the Hungergames: Mockingjay set.

Jennifer Lawrence has enjoyed huge success with her role in the Hungergames film franchise. This is, in part, due to how well she is able to relate to her character, Katniss Everdeen. Digital Spy has reported that in the November issue of Empire Magazine, Jennifer Lawrence spills on how much she can actually relate to her role in Hungergames. She says that although it was not exactly like staring at herself in an emotional mirror, the connections are there nonetheless. She has been quoted as saying, “…there is the connection in that she doesn’t feel like just part of the town anymore.”

Jennifer Lawrence has gotten a reputation among followers as a humble hollywood star, and through this, has earned the respect of many. She does, however, admit to having changed on the Hungergames after she won the coveted golden statue. She says that when she arrived back on set, things definitely changed a little. Empire inquired if she had assumed the diva role and she replied, “Well, of course I changed.” She jokingly says that she walked into the studio and said,” Things are going to be a little different around here from now on.'”

According to Lawrence, her humble attitude is from the way she was raised. Her family instilled the importance of respect for both money and oneself. Gratitude, as seen below, is also one of the award-winning actresses secrets to success.

“I just constantly feel so lucky, that I don’t really have time to feel cocky,” she said. “I was raised to have value for money, to have respect for money, even though you have a lot of it.”

The three are set to have fans of the Dumb and Dumber To film in stitches of laughter as Jennifer Lawrence should shine in her cameo comedy role. Already, the sequel’s storyline looks more promising than the disappointing prequel, Dumb and Dumberer. In the sequel, Lloyd (Jim Carrey) and Harry (Jeff Daniels) join their comedic forces on a road trip.  No ordinary road trip, the two are on a mission to find a kidney. The potential source of this kidney? None other than Harry’s long lost daughter. Still not convinced? Just asking the question, “what would those two idiots be doing 20 years down the line?” might just peak the curiosity enough. Here’s another thought; what about those two idiots living in present-day social media driven communities? The fact that one of them is parent is but a joke in itself. It will be interesting to see how the film ties in the roots of the first Dumber and Dumber without going “too stupid” and a more present day approach to films, filming, and the way audiences perceive value.

Jennifer Lawrence sure has her work set out for her in this Dumb and Dumber To, especially since it is her cameo role in a comedy film, a film which has received mixed feelings of welcome  from critics after the poor show of the attempt at a second installment, the Dumb and Dumber prequel.