Iran’s Nuclear Program has Ramped Up with Chemical Weapons 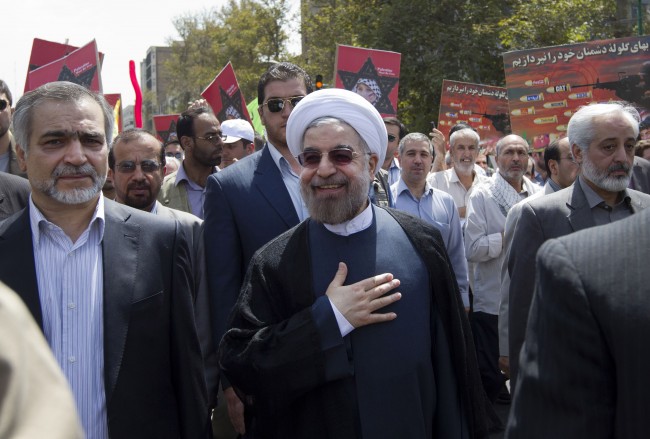 According to a report by the DailyCaller’s Reza Kahlili, Iran has a facility in the Fars Province producing chemical weapons. One of the chemical weapons being produced is Sarin gas, not only an internationally banned substance, but the same chemical that Assad’s regime, in Syria, used on more than 1,400 civilians this past Aug. 21st.

Code named “Baasat,” this branch of Iran’s chemical weapons program is located at Shahid Dastgheyb and is producing five chemical gases. This information comes from a Revolutionary Guard source, who remains anonymous for security reasons, in the region.

The chemical weapons being produced are sarin, phosphor chlorine, mustard, CX (phosgene oxcime), and nitrogen mustard. The site of the chemical facility is outside the city of Shiraz, near the town of Bajgah. This plant, close to the Revolutionary Guards’ naval base in Ahmad Ibn Mousa, has been built under a mountain. The close relationship to the Guard’s naval base is actually to transfer these chemical weapons to other facilities as well as depots around Iran, not as the training site it claims to be.

In addition to the gas itself, the Guard has also been developing ways to deploy the chemical weapons. It has been reported that they are producing sodium cyanide bombs along with three ways to deliver them: by cluster bombs, artillery shells, and warheads on mid-range missiles.

In blatant disregard for the sanctions and resolutions by the United Nations, European Union, and the US to halt the Iranian nuclear program, the regime has actually expanded it. In light of the information on the chemical weapons programs, it seems that it is not just nuclear capabilities the country is developing and deploying. The nuclear program currently has well over 10,000 centrifuges running and enough enriched uranium for over six nuclear warheads. Iran is also set to complete a heavy-water plant soon, which would provide weapons-grade plutonium, another path to developing nuclear capabilities.

In a previous media release this past Aug., the Revolutionary Guard admitted to not only having WMDs, but to arming its terrorist proxies. The commentary pointed, explicitly, at the destruction of Israel and Tel Aviv.

The information, being true, has far reaching implications for the west and any perceived enemy of the Islamic regime or its terrorist proxies. Due to the United States relationship with Israel, the administration will not be able to sit idly by if this information is proved to be accurate nor if Tel Aviv is directly attacked. In light of this information, it seems that the talks in New York this coming Thursday, September 26 at the UN about nuclear disarmament, could be rather tense.

The tests of the Minuteman III ICBM out of Vandenberg Air Force Base in California very well may have been a signal to Iran, and perhaps the rest of the Middle East, of our nuclear capability. However, that subtle show of force may mean nothing if Russia, with its extensive stockpile of nuclear weapons, decides to back up Iran as they have Syria. Perhaps all of this is more echoes from our Cold War past, where the US and Russia have fights in and with other countries pitted against one another. Only time will tell, but we may be hearing a lot more about this as time goes on. Especially as we get closer to the UN negotiations this Thursday, there may be words between leaders as Iran’s chemical weapons program gets unveiled with their increasing nuclear program.

Iran’s Nuclear Program has Ramped Up with Chemical Weapons added by Iam Bloom on September 23, 2013
View all posts by Iam Bloom →