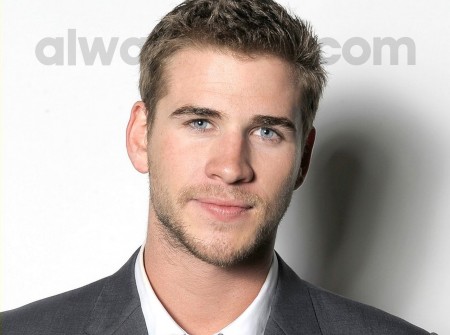 Not to put too fine a point on it, but Liam Hemsworth is obviously over Miley. He wasted no time in hooking up with the new girl in town, Eiza Gonzalez. Rebound she may be, but he and Eiza G. were caught k-i-s-s-i-n-g on camera. Miley could be more than a little twerked off!

After Liam ditched 20 year-old Cyrus he told her she could keep the ring and do whatever she wanted with it. Call us cynical, but we don’t really think that is exactly how he put it. We can imagine that he may have told her exactly what to do with it!

Still, the 23 year-old Hunger Games hunk wasted no time getting with his new gal, Eiza. They spent a lot of time together in Las Vegas enjoying each other’s company. Keeping their romantic weekend low-key, they were not spotted doing anything too overt until the Tuesday after Vegas. It was outside Casa Gonzalez in Beverly Hills, California that the two were caught locking lips in a very seamy exhibition of lip love.

Miley may have wished that she had waited to unfollow Hemsworth until after his steamy and photographed clinch with Eiza. But then, she may be too busy to care one way or another. One of the rumored reasons for her split from Liam was that they were living separate lives. Miley has been on the promotion trail publicizing her recent Bangerz singles, We Can’t Stop and Wrecking Ball.

If the recently released photographs of Liam and Eiza have been seen by the singer, she probably has not had time to react.

Liam doesn’t have a lot of time to think about how Miley might feel. He is on his way to the Mocking Jay part one and two shoot in Atlanta. He was spied wearing his New York ball cap as he was making his way to an outbound flight to Georgia from Los Angeles International Airport.

Undoubtedly his mind will be on his work and on his 23 year-old new girlfriend who is also travelling. Eiza has a scheduled appearance south of the border so she’s busy as well. Although Perez Hilton did mention that Ms Gonzalez was spotted heading to the Fig and Olive eatery in West Hollywood shortly after her lip-lock with Liam.

She is going to Mexico to record the Spanish dialogue for Eep Crood for the film The Croods. She is said to be very excited about doing the voiceover work for the Dreamworks movie. And since she also has a new romance to think about, she must be over the moon right now.

Of course the big news is not Eiza’s voicing Eep Crood, or Liam going of to continue work on the Hunger Games saga. It is all about that kiss captured for posterity by some sharp eyed paparazzi. Eiza looks gorgeous in the snaps and apparently Liam thinks she does as well!

The public romantic interlude seems to indicate that Hemsworth was more than ready to ditch his four year relationship with Miley. We feel bad for the twerking Cyrus, but if you compare how Liam and Miley looked the last time they were together with Eiza and Liam, you can see the difference.

The couple obviously enjoy each other and we think they look cute together. Like the title says: Liam Hemsworth and Eiza G: k-i-s-s-i-n-g. Sorry Miley, but the new Hemsworth couple look like they might be a better fit.