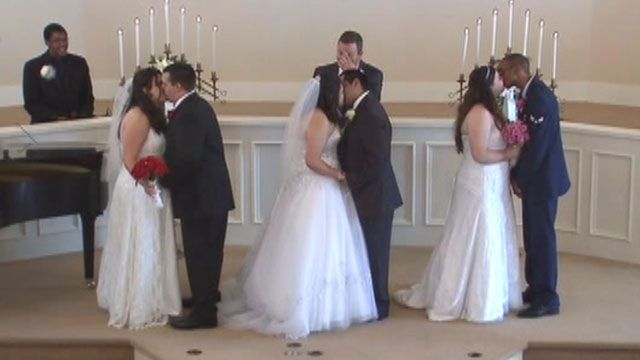 Becky Swales sat in the front row with her proud husband as they watched their three beautiful daughters wed their grooms. Brimming with tears and smiles, Becky was able to celebrate a major event with her daughters. The next morning, Becky passed away, four years after being diagnosed with breast cancer. Three Georgia sisters planned a triple wedding in honor of their dying mother, a dream she wished for came true before she passed away.

Jodie, 22, Sarah,19 and Kaylee, 21 were engaged to their respective fiances and knowing their mom was ill, they had originally aimed for an October 26 wedding date. Last week the family received a grim prognosis; their beautiful matriarch’s time would come sooner than expected.  The girls collaborated and wanted a way to honor their mother in an event to bring smiles and tears of happiness.

With the help of family, friends, public donations and their inspiring father Otis, the dream wedding plan began. The three sisters scrambled to gather their dresses and their supportive grooms were ready for the day. On October 13, Becky made the trek to watch her daughters walk down the aisle. Otis accompanied each of his daughters and passed their hand to their future husband. A triple wedding that brought tears to a dying mother who only wanted to see happiness for her children.

Becky passed away from the breast cancer, a disease that continues to be battled by millions of women and men across the globe. Sadly, for Becky, her cancer spread into her liver, resulting in a limited amount of time to say good-bye to her family.

Breast cancer takes the lives of over 39,000 people annually. One out of eight women will be diagnosed with breast cancer, there is a great hope cures are on the horizon. Over 2.8 million cancer survivors strive and push agencies for a goal of finding a cure. Per the American Cancer Society, symptoms that may create concern include:

Doctors advise to seek immediate assistance if a concern is ever considered. Adults over the age of 40 or those with a higher risk factor should seek mammograms on an annual basis. The earlier symptoms are caught, the better chances of beating the risk of cancer.

For one family in Georgia this week is filled with bittersweet emotions. Otis was happy to have his beautiful wife attend such a joyous event shared with his three daughters, but knew it would be the last event he would attend with his wife.

Becky raised three daughters that only wanted to give back the love and consideration their mother had shown them their lives. The minute the public received word the wedding would be earlier than expected, donations poured in, including a donation for the reception. The reception will be held October 26 and the three sisters plan on honoring the memory of their mother during the celebration.

Three sisters from Georgia collaborated to plan a triple wedding held in honor of their dying mother. Prior to her passing, Becky took to Facebook and left a final message of blessing and hope:

My loving husband, my three beautiful daughters and my Mom have stood by me every step of the way. I can’t say enough about what a blessing that has been