Boomerang Nebula Even Colder than the Afterglow of the Big Bang

The far-off Boomerang Nebula in the constellation of Centaurus has earned the title of the Universe’s Coldest Place. Yes, this planetary nebula is colder than the dark side of the moon, Buffalo, New York in January, and even your cheating girlfriend or boyfriend’s heart, registering in at a staggering one degree Kelvin. In Fahrenheit, that’s a minus 458 degrees. That’s believed to be even colder than the Big Bang’s afterglow.

Located in the constellation Centaurus, some 5,000 light-years distant, the Boomerang Nebula resembles, in some of photos of it, a glowing Halloween ghost. Astronomers have known about it for some time, though they have recently learned much more about the Boomerang Nebula through photos they’ve seen using ALMA, the Atacma Large Millimeter/submillimeter Array telescope. 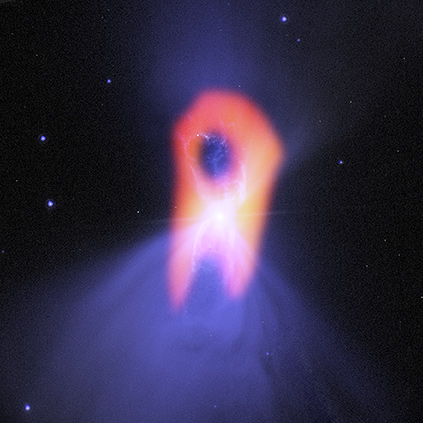 The Boomerang Nebula’s twin lobes may be an illusion

The twin lobes we see in NASA’s Hubble telescope photo of the somewhat bow tie-shaped Boomerang Nebula may be an illusion, a trick of the light, a bit of cosmic legerdemain. It’s what we see “at visible wavelengths,” according to NatMonitor.com.

The ultra-cold planetary nebula’s twin lobed shape is why some imaginative scientist decided that it resembled a boomerang more than a bow tie, and it’s how the space object ended up with a cooler-sounding name.

However, the shape we see in photos of it is not its actual shape.According to a researcher at NASA’s Jet Propulsion Laboratory, and lead author of a study about the Boomerang Nebula, Raghvendra Sahai, its real shape is “a much broader structure that is expanding rapidly into space.”

What is a “planetary nebula”?

Stars like our sun eventually become planetary nebulae at the end of their lives as stars. They shed their outer layers until only a white dwarf star remains. The white dwarf star gives off ultraviolet radiation. This, in turn, creates a colorful display by making the gas in the nebula radiate light and glow.

Currently, the Boomerang Nebula is a pre-planetary one, which means it’s not yet to the stage where it’s white dwarf star is hot enough to make the gases it emits glow even more. It will get even more colorful with time. It was detected due to the reflection of starlight off of its dust grains.

How were astronomers able to measure the coldness of the Boomerang Nebula?

The rate at which the white dwarf star at the center of the Boomerang Nebula is discharging gas is growing rapidly. As this is occurring, the space object is also cooling down.

The astronomers figured out how cold the Boomerang Nebula was by studying the speed at which it absorbed background microwave radiation, which is, itself, extremely cold. In Fahrenheit, it registers in at minus 455 degrees.

In 2003, using Hubble, astronomers saw a version of what the Boomerang Nebula looks like, according to Sahai, that was what appeared to be what they’d seen many times before, when they’d examined planetary nebulae. It resembled “a very classic ‘hourglass’ shape,” he said.

According to Sahai, using ALMA helped his research team “to shed new light on the death throes of a Sun-like star.” ALMA also enabled them to discover that it was the coldest known place yet discovered, and is possibly even colder than the afterglow of the Big Bang. The findings of the study have been published in Astrophysical Journal.