By Michael Smith on October 19, 2013Comments Off on Justin Bieber New Release is Hold Tight Like His Grip on Strippers Assets 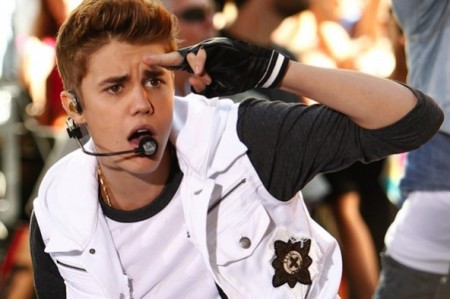 Justin Bieber has announced that his new track release will be Hold Tight which is pretty appropriate since that is, allegedly, what he did to a strippers ass-ets in a gentlemen’s club. Bieber got onto his Twitter account on Friday to post an Instagram snap of the artwork for his newest single. He informed his plethora of fans that the song will be released on Monday, Oct. 21 as a part of his Music Monday’s 10 week promotional campaign.

The 19 year-old Canadian popstar, then tweeted another Instagram image of his next new track, titled Wait For a Minute. This track was a collaboration between Justin and rapper Tyga that the singer says will be released on Tuesday. His actual tweet stated that the first song would be available from Sunday at midnight and the second on the Tuesday.

Unfortunately, Justin wasn’t the only person tweeting exciting things on the microblogging site, a stripper from a Texas “gentleman’s club” got onto her Twitter account to tweet about the popstar’s handling of her ass-ets. He apparently decided to test the merchandise on view at the Texas club.

The stripper, who has the Twitter name @1real_diamond, tweeted that the singer “touched my ass” and that she had almost fainted from the experience. Apparently Bieber was quite taken by her nether regions, so much so that he felt obliged to touch.

@1real_diamond went on to say that Justin’s reaction to his “little fondle” was to say “it’s real!” The stripper also tweeted that she had performed for a “lot of celebrities” but that she was not phased by any of them. According to her, Justin’s reaction and action put her “in shock.” The entertainer did not say whether or not Justin Bieber had a tight hold or grip on her ass-ets.

The stripper also tweeted, that she was now a @justinbieber fan. Apparently pictures from Bieber’s “gentlemen’s” night out, show the popstar with his trousers down low in order to brandish his red boxer shorts. In the background stands a topless woman; there is no indication as to whether the woman is @1real_diamond or not.

There has been no word about Justin’s mother Pattie’s reaction, hopefully she hasn’t seen her teen popstar’s latest escapade on either Twitter or the news yet. On the bright side, it doesn’t sound like Bieber was partaking in any alcoholic beverages at the establishment, although, the idea that he was sober while touching up the help is a bit disturbing.

Sadly, the stripper did not tweet anything about Justin’s new Music Monday’s program. Perhaps she was not a Bieber fan last Monday, when the singer released his single track Never Say Never. Bieber has been tweeting to his fans that he was sharing “everything” with them along with the hashtags #10weeks; #MusicMondays; #journals; #BelieveMovie and #AllThatMatters.

He tweeted that the music and its lyrics were self explanatory and that it was all about falling in love and feeling whole. Speaking of feeling, it would have been nice if Justin Bieber had tweeted about his “holding tight” onto the strippers ass-ets. If nothing else to let the young performer know if he was as excited about that low grip as she had been.