By Michael Smith on October 28, 2013Comments Off on Lady Gaga Playing Controversial Catch up with Miley Cyrus 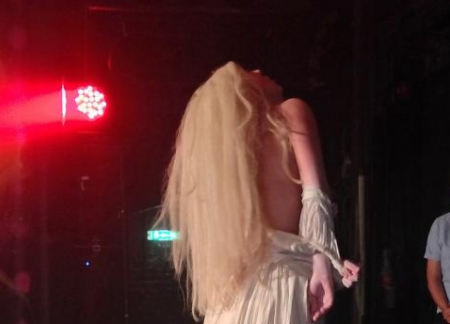 Mother Monster, aka Lady Gaga, has been very busy over the weekend playing “controversial catch up” with Miley Cyrus. After giving a live performance on the English television show The X Factor in a flesh colored “nude” bra and panties, she later went on to give a “surprise” nude performance in the popular G-A-Y London nightclub. Admittedly, Gaga did have a bit of a head start on Miley Cyrus in the controversial stakes.

The 27 year-old performer has a rabid following that she calls her “little monsters” and she is a favorite of the gay and lesbian set. Lady Gaga has always emulated musical icon Cher to a degree, in that she wears costumes that often completely ignore good taste in favor of spectacle. She even wore a costume that consisted of raw meat.

It was bound to happen sooner or later, Lady Gaga has obviously run out of outrageous and controversial costumes so she has had to resort to wearing her own skin on stage. Or, in the case of ITV’s X Factor on English television, a flesh colored facsimile. It comes as no real surprise that the musical artist is rushing to compete with younger singer Miley Cyrus in terms of shocking audiences. Lady Gaga’s controversial catch up is her attempt to reclaim the throne she occupied before Miley’s MTV and music video escapades.

Although, it has to be said that recently, Lady Gaga has been preoccupied with her birthday suit and appearing in it as often as possible. Unfortunately, familiarity does indeed breed contempt, or at least a sense of acceptance. About the same time that Miley Cyrus was riding a wrecking ball naked, save for the ball, chain and sneakers, Mother Monster was doing a promotional video for Marina Abromovic’s Kickstarter video.

It has to be pointed out that this close to Halloween, Gaga’s appearance in the video was creepy enough that parents could have the video playing in front of their houses and no one would stop by to trick or treat on the night. The odd poses, the endless “a” being sung by Mother Monster and the off-kilter feel to the entire clip, makes for one disturbing experience.

Perhaps as disturbing as her appearance on the X Factor, after her live performance ITV received over 150 complaints about Lady Gaga’s routine. This is nothing new for the musical competition program, they have had complaints recently about other artists who have acted inappropriately on the family focussed show.

On top of her controversial performance on English television, she went to the gay themed night club to perform her new song Venus. As part of her surprise appearance, Lady Gaga came out on stage dressed, according to club patrons, as a ghost. Although pictures of the performer made it look like she was doing her Mrs Haversham impression from Great Expectations. Her costume certainly looked like a rotted wedding dress, at any rate.

She then stripped off the dress to reveal every inch of her body for the audience. Gay British comic Matt Lucas tweeted from the club about the surprise event. Lucas wrote that everyone had seen Lady Gaga’s “arse” and “vagina” but, they were staying gay. Obviously, the nightclub was more appreciative of the performer’s naked song than the television audiences who caught her act on Simon Cowell’s X Factor.

Lady Gaga, is apparently playing controversial catch up with Miley Cyrus. Ever since Miley appeared on the MTV Video Music Awards and twerked into Robin Thicke’s crotch and appearing starkers in her Wrecking Ball music video, she has been the hottest topic on the planet. Mother Monster has lost ground on the attention seeking arena and needs to increase the stakes. The next move in the catch up competition is Miley’s.