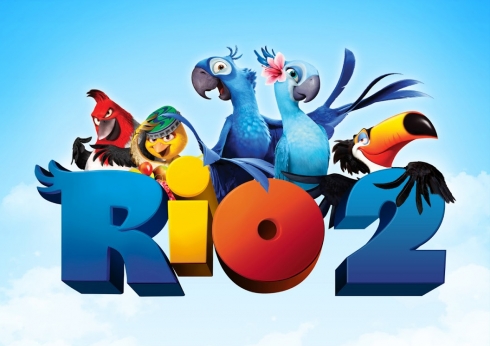 Blu (Jesse Eisenberg) and Jewel (Anne Hathaway) are back. Our two favorite blue macaws are back in action and this time, they’re with their three little kids (played by singer Rachel Crow, Pierce Gagnon and Amandla Stenberg) and living in the lively and beautiful Rio de Janeiro. The new Rio 2 trailer on YouTube takes us again into the magical streets of Rio where director Carlos Saldanha’s camera transports us into an animated universe that couldn’t just get more colorful.

Being the wild bird that she is, Jewel finds it in her heart to leave Rio and sail the wild to the Amazon rainforests where she believes her kids will connect with their roots the most. “We’re not people, Blu. We’re birds,” Jewel tells Blu who has already accustomed his domesticated persona to life in Rio de Janeiro after leaving Minnesota and he finds it a bit hard to welcome another change. What complicates things more for Blu is meeting Jewel’s father-in-law, Eduardo (played by none other than Andy Garcia) in the Amazon and finding it difficult to get along with him.

So is Rio 2 going be the Big sequel of 2014? We’ve already seen Despicable me 2 and it was great. Director Carlos Saldanha’s keen cinematography, lush backgrounds and vibrant colors will take viewers deep down into the Amazon rainforest and unravel its beauty. With the theme of Blu’s constant reluctant migration from one place to another, it would be really interesting to see how he reacts to the changes Jewel has brought into his life. We’re also waiting to see whether Jewel is going to stick to Blu even as she answers her call of the wild or she will drift away. Their three kids have a lot to take after their parents and viewers would anticipate who is going to be like exotic Mommy and who will end up a mini version of chaotic Daddy.

The Amazon haven is likely to be disrupted, however, by the return of Blu and Jewel’s old nemesis, Nigel the Cockatoo who is back for revenge. Even with a predictable storyline, Rio 2 is likely to attract viewers for its amazing visuals and its set of funny, engaging characters. One can also wait and see how the story unfolds and what other adventures are Blu and Jewel going to face in the dazzling Amazon rainforests

Rio 2 takes us into the Amazon