By Tara Aarness on October 22, 2013Comments Off on New South Wales Threatened by Deadly Fire 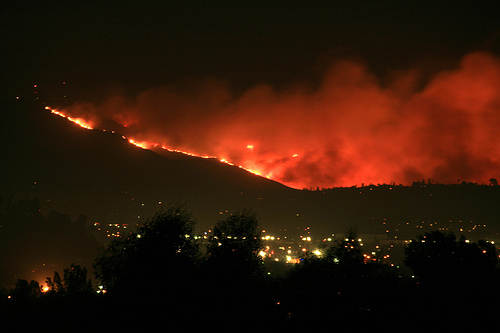 An 11 year old boy has been granted bail after setting two deadly fires that are ravaging and threatening the Blue Mountains in New South Wales, Australia. One fire left nothing in the 5,000 hecters/12 acres it rushed through, and one man is dead due to the inferno.

Now on its seventh day, some residents of New South Wales are encouraged to leave their homes as 17 of the 60 fires are yet to be contained and another 1400 fire fighters are being brought in to help stamp out the blaze.

Many are without homes tonight as 200 houses have already been lost, and many more residents will be without jobs. The government will offer monetary support for those who qualify, and the amount of $1,000 for an adult and $400 for a child will help citizens “…get back on their feet and back to work,” the federal justice minister Michael Keenan said. However there will be a strenuous 48 hour waiting period before anyone will receive their emergency funding.

Adding insult to injury, Sydney, Australia, located 60 kilometers/30 miles from the Blue Mountains, could witness a pyrocumulus cloud, more commonly known as a fire cloud.  Fires of larger caliber in size often generate these clouds as the hot air from the fire rises and cooler air takes its place. The hot air consists of smoke and water vapor and as it mixes with the volatile atmosphere it rises higher where, once reaching high enough altitude, it will create a pyrocumulus cloud. The danger with such clouds is that while they have the ability to produce much needed rain to assist the fire fighters battling the blaze, they also have the ability to produce lightening and the opportunity to ignite another fire for the already battle worn fire fighters to put out.

Officials with the Rural Fire Service confirmed such a cloud over the State Mine fire in the New South Wales, which spanned 42,000 hecters/103 acres threatens to turn deadly. If a pyrocumulus cloud from the Blue Mountains forms and collides with the one formed over the State Mine fire it would be the largest fire ever created in New South Wales history. “I don’t think I’ve ever used the word mega-fire. But the reality is that the modeling indicates that there’s every likelihood that in the forecast weather condition, these fires, particularly in the back end of the mountains, will merge at some point,” Shane Fitzsimmons, Fire Service Commissioner, said.

Over in Lithgow, just west of Sydney, fire fighters are working hard to prevent such a tragedy from forming with a another fire in Springwood, as each fire burns closer together, threatening homes, businesses, and wildlife alike.

Residents are stepping forward to do their part as they aide wildlife in distress. Taking to the forests and waterways locals are helping to protect the sustainability of wildlife. As the fire dashed toward the shores of Lake Macquarie at Chain Valley Bay, wildlife dove into the waters to escape the fateful death of being burned alive. Thanks to the quick thinking of locals, boats took to the water as several residents combed the lake for signs of life. Wallabies travail the water and were pulled into safety, later being nursed back to health.

Hopefully, this deadly fire which threatens New South Wales will be extinguished before more lives are lost.