By Cynthia Collins on October 1, 20133 Comments 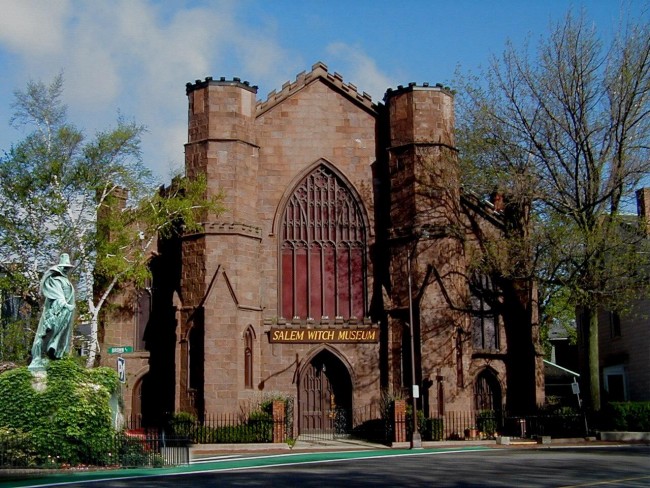 Throughout the United States, people are beginning to get ready for Halloween. Every October 31st, stories of ghosts and witches, and many other things, filter into conversations. But the subject of witches was far more than a discussion topic in the early days of the Massachusetts Bay Colony. A series of events resulted in the Salem witch trials of 1692. Salem, Massachusetts has several sites that recreate the time of the witchcraft trials. One of those places is the Salem Witch Museum.

The Founding of Salem

English merchants were sending ships to fish off the coast of Newfoundland in the early 1600s. That required a double crew, one for sailing and one for fishing. If a settlement were established in New England, the fishermen could stay there during the winter until the ships returned. The merchants formed the Dorchester Company in 1623 and bought the ship Fellowship to take men and supplies to Cape Ann to settle in what is now Gloucester, Massachusetts.

The fishing expedition in 1623 was a failure, as were the ones in 1624 and 1625. The company had to finance the 1625 voyage with borrowed money. They needed someone to manage this new settlement so they invited Roger Conant to act as their governor. Conant had arrived in New England in 1622 but was not part of the Dorchester Company. After staying a year at the Cape Ann location, he looked for an area better suited for a more permanent community. The Cape Ann settlement moved to the new site at the mouth of the Naumkeag River in 1626 and was named Naumkeag.

The Dorchester Company went bankrupt in 1627 and became the Massachusetts Bay Colony in 1629. Also in 1629, Naumkeag was renamed Salem, after the Old Testament usage meaning “peace.” It was derived from the Hebrew word “shalom” and the Arabic word “salaam.” Conant died on November 19, 1679, well before the witch trials of 1692.

Events set in motion prior to 1692 were gathering momentum. They ranged from religious beliefs, social conformity, health practices, education and the economy. In 1689, Reverend Samuel Parris accepted the position of minister for the agricultural community of Salem Village. His household included his wife, daughter, niece, and an Indian slave named Tituba who had become part of the Parris household in Barbados. Salem was growing in size and population. Part of its growth included increased tension regarding how independent Salem Village should be from Salem, the seaport community.

The winter of 1692 was bitterly cold. Reverend Parris’ daughter, Betty, showed a variety of symptoms of diving under furniture, fever, doubling over in pain and running around the house. Soon, her friends had similar symptoms. When the doctor could not cure them, he suggested the source of the problem might be supernatural.

Cotton Mather, a Puritan minister, had published a book in 1689 called Memorable Providences. In it, he described in detail about the witchcraft of an Irish washerwoman in Boston and the afflictions her victims suffered. His book was very popular and he claimed that what he wrote was true. Reverend Parris, also a Puritan, owned a copy and noticed the similarities in the way his daughter and her friends were behaving and the way the children acted in Mather’s book. Adding to Parris’ suspicions was Tituba, the slave, who was known for telling stories about voodoo, evil spirits and witchcraft based on her native folklore.

The Salem Witch Trials of 1692

The Puritans had left England for religious freedom, however, they didn’t extend that same tolerance to others. Anyone who acted or believed differently than they did was under suspicion. By the end of February 1692, three women were accused of witchcraft. Each one did not fit the normal, or stereotypical, ideal of a proper Puritan woman. Tituba, the slave; Sarah Good, a homeless beggar; Sarah Osborne, an old woman who had stopped going to church, were all considered social outcasts.

The women were questioned publicly on March 1st by county magistrates. The young girls went into fits in their presence. More women were accused of witchcraft and more young girls claimed to be the victims. The accused “witches” were sent to jail, including a four-year-old girl, Dorcas Good, who spent eight months behind bars. Men were also arrested for witchcraft, as were people who didn’t believe in the accusations.

A special court was created to for the witch trials called the Court of Oyer and Terminer, meaning to hear and to decide. Those who were found guilty were sentenced to death by hanging. The former minister of Salem Village, George Burroughs, was accused of being the leader of the witches. He was living in Maine in 1692, arrested, brought to trial and found guilty. He, too, was hung. All totaled, 13 women and five men were hung; one man was pressed to death with heavy stones. The last day for hanging the accused witches was September 22, 1692. The Court of Oyer and Terminer was replaced by the Superior Court of Judicature. Those who were waiting for a trial were released and the ones who were to be executed were pardoned.

With the ending of the witch trials, the community gradually began to heal. The Salem Witch Museum takes a close look at not only the events of 1692 but also the similarities of other “witch hunts” throughout history. For additional information, the museum’s website is listed below.