Teen Bullying Not Always from Teens 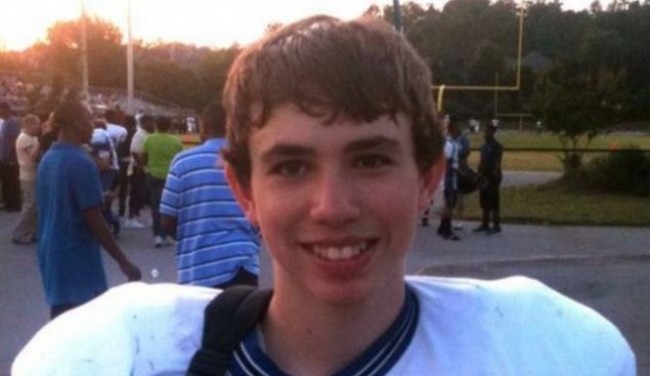 We all are outraged when a teen commits suicide because they have been the victim of teen bullying as in the case of 12 year old Rebecca Sedwick last month, but where is that same outrage when it is the mis-guided actions of adults which cause the suicide?

Such is the case of the suicide of Christian Adamek, 15, of Huntsville Alabama, who hanged himself on October 2 and died two days later. Why did he do it? He had been arrested on September 27 for streaking across the football field during a game at Sparkman High School. After bring threatened by school authorities he might be facing charges as an adult requiring him to register as a sex offender for the rest of his life, he ended it.

Christian was expelled from school after the incident which was described by all concerned, not as a sex act but a gag. This wasn’t enough for school officials who insisted on going forward with pursuing criminal charges through the local court system. School officials defended their actions saying. “There’s the legal complications. Public lewdness and court consequences outside of school with the legal system, as well as the school consequences that the school system has set up.”

According to rumors garnered from the internet, Christian believed he would have to register as a sex offender for the rest of his life although after his death Madison County Assistant District Attorney Tim Gann said he more than likely would have been put on probation and he would not have been required to register.  Too bad Christian didn’t know that.

Zero tolerance that’s the key. It doesn’t matter how childish the act is, that it was the result of a teenage boy doing something on a dare, he broke the policy and damn it we will prosecute to the full extent of the law.  From all accounts, Christian had no problems which would cause him to hang himself. True we never truly know, but everyone who knew him said he was a happy, fun-loving, well-adjusted kid. But it doesn’t matter he broke the rules.

This is the second case in the news lately of a zero tolerance policy which goes too far. Erin Cox is a 17 year-old high school student in North Andover, MA, captain of the volleyball team, on the honor roll and a good friend who can be counted on by her friends to help them if they are in need. This is exactly what she did one Friday night when a friend called her and asked if she could pick her up at a party because she had been drinking and didn’t want to drive. Erin drove to the party to find the police there breaking up the party. She and others were told they would be summoned to court about the party and when the local school authorities found out she was there, they punished her by demoting her from the captaincy of the volleyball team and suspending her for five games. The school officials cited the school’s “Zero Tolerance” policy on alcohol. No, Erin didn’t hang herself, but what if she decided not to go pick up her friend and her friend drove drunk? What if her friend decided she better not call Erin or any other friend for a ride since she didn’t want them to get in trouble because of the “Zero Tolerance” party? What if the friend killed herself or someone else with her car?

Is this really what we have meant to accomplish by these policies which pretend to be in the best interest of students? Did we really mean for teens to kill themselves, for others to drive drunk or for some to decide to not do the right thing? What has happened to common sense?

Teen Bullying Not Always from Teens added by Paul Roy on October 18, 2013
View all posts by Paul Roy →