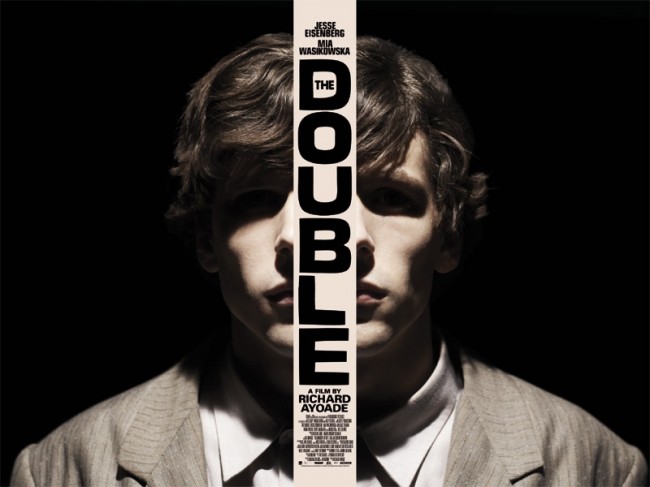 Jesse Eisenberg vs. Jesse Eisenberg, would that be his best role ever? I doubt. Jesse Eisenebrg has yet a flexible mesh of talent, now that he proved his capability of playing arrogant, egotistical characters alongside whimsical, neurotic ones. Two new quad posters, Rorschach-like headshots, were released in October making an ode to the movie’s overall bizarre yet inventive atmosphere and dark humor. The halvsies feature Mia Wasikowska, who plays Hannah, photocopy girl and Simon/James love interest, and Jesse Eisenberg adding an eerie look to their split faces, although not revealing much of their split personas.

In “The Double” -Richard Ayoade’s unique take on Fyodor Dostoyevsky’s novella The Double: A Petersburg Poem- we find Jesse Eisenberg playing both polar opposite characters simultaneously. Ayoade pits Jesse Eisenberg against himself in a Dystopian world, where he plays Simon James, the meek yet hardworking young man who is overshadowed by his charismatic and diabolical doppelganger James Simon from the moment he shows up at work. Nobody seems to notice the identical similarity between the two men, even when Simon mentions it. Barely recognizable, Simon finds himself pushed to the background even further as James takes over everything Simon does or wants: Hannah, his job, recognition from his bosses and even personal items from his apartment. The events unfold rapidly with Simon’s despair degenerating into madness. 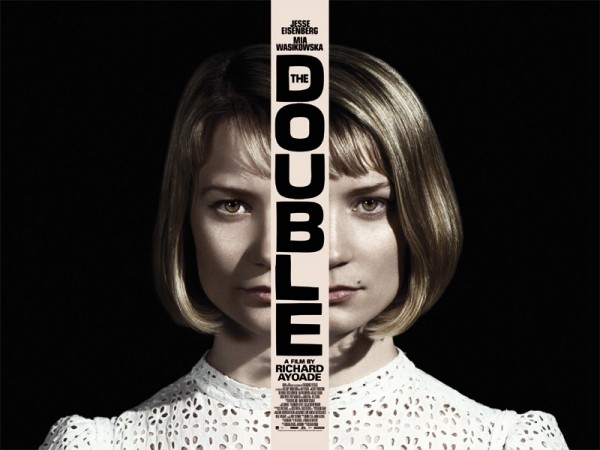 In Dostoyevsky’s novella we follow Yakov Petrovich Golyadkin’s (Simon in our movie) downfall into schizophrenia where he hallucinates seeing himself in every socially awkward situation possible. In the movie, however, we are treated to Richard Ayoade’s take on the novella which leans more toward a Kafka-ian universe with unexpected, dark humor and a great musical score by Andrew Hewitt that suits the claustrophobic mood of the film.

Richard Ayoade’s fans will be delighted at this bold, second directorial project. In his directorial debut, Submarine (2010), Richard was compared to Wes Craven with his use of the coming-of-age genre on the background of teenage humor and sexual experiments. The Double is a cleverly made shift from Submarine and its comedy. Whereas the comedy in Submarine is quirky and catchy, whereas The Double takes us into the recesses of dark, oftentimes shocking humor.

Jesse Eisenberg states in a radio interview that the humor in “The Double” comes from the meanest situations. “The funny situations are actually coming from very sad moments and the upsetting scenes show a dark sense of comedy”. The movie seems to take the viewer into the strangest of places visually and emotionally.

It would be nice to know that “The Double” set worked as a matchmaker for its two leads, not Jesse and Jesse of course! Jesse Eisenberg and Mia Wasikowska have gone publicly as a couple in Toronto International Film Festival with hints that the romance started on the set of their latest movie together. Pictures of the couple strolling by the beach and kissing were leaked to newspapers, showing how the way they treated their relationship was so-not-fake and so not Hollywood.

“The Double” release date in the US has not been set yet but it has already been screened as part of the 2013 London Film Festival.