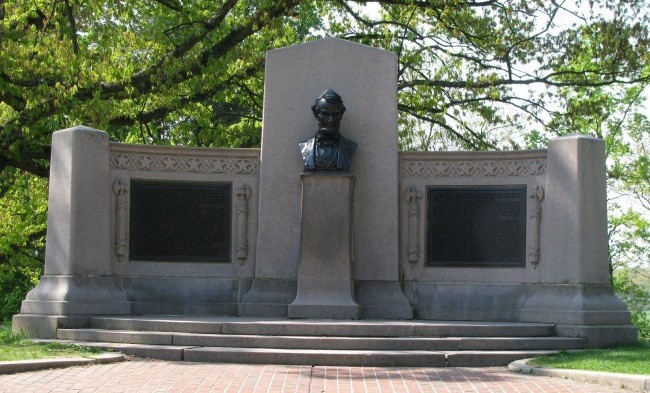 Abraham Lincoln addressed a war-weary nation at Gettysburg 150 years ago, Nov. 19, 1863. The speech was part of the dedication of the Soldiers’ National Cemetery at Gettysburg, Pennsylvania, four and a half months after the defining battle of the Civil War.

The Battle of Gettysburg marked the northernmost advancement of Confederate troops into Union territory. The Emancipation Proclamation was issued by President Lincoln, Jan. 1, 1863, but the war continued in its rage. Approximately 170,000 soldiers, representing the combination of Union and Confederate troops, fought on the battlefield at Gettysburg from July 1 to July 3, 1863. The number of wounded, killed or missing soldiers was staggering: 23,000 Union and 28,000 Confederates.

The dead were buried quickly to avoid the spread of disease. Shallow graves were marked with a pencil inscription on wooden boards. The ground started eroding due to wind and rain so the people of Gettysburg called for a cemetery to give Union soldiers a proper burial. Pennsylvania Governor Andrew Curtin approved and a committee chose the area that included the hill where Union forces pushed back a Confederate assault, ordered by General Robert E. Lee, known as Pickett’s Charge. The property was purchased with funds appropriated by the state and reburial began in late October.

The committee planned a dedication ceremony even though the cemetery design and reburials were a long way from being finished. They invited a well-known orator, Edward Everett, to be the speaker. Everett was used to public speaking, having served as a past president of Harvard as well as a former U.S. senator and secretary of state. They also invited Lincoln to offer some “appropriate remarks.”

A crowd of 15,000 or so had gathered. Everett spoke for two hours on what caused the war and what had specifically led to the Battle of Gettysburg. Lincoln spoke after him for two minutes. That speech was the Gettysburg Address. He acknowledged the dead but focused on the living by talking about “the great task remaining before us.”

The day after the dedication ceremony, his speech and Everett’s were reprinted on newspapers throughout the country. The opinions were divided along party lines. Republicans stayed true to the president, a Republican, and praised the speech. Democrats, on the other hand, didn’t have much good to say about it claiming it was inadequate for such an important dedication. An editorial in a Harrisburg, Pennsylvania newspaper, the Patriot & Union (now known as the Patriot-News), called it “silly.” This was published Nov. 24, 1863, five days after the event. This paper issued an apology Nov. 14, 2013, 150 years later with a lengthy article explaining the paper’s position during that time.

The 273-word text, though short, has become the most famous speech in the history of the United States. Everett later wrote saying he wished he “had come as near to the central idea of the occasion in two hours as [the president] did in two minutes.”