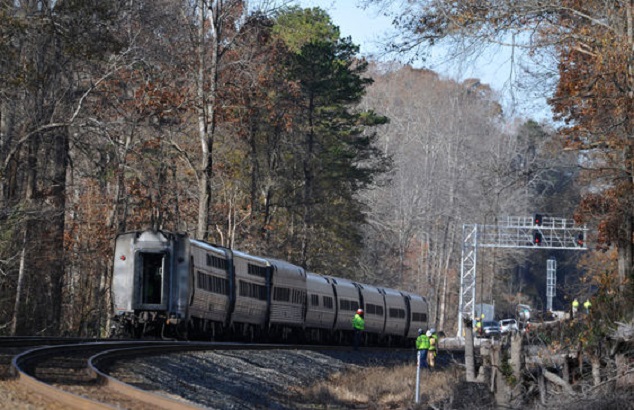 An Amtrak train derailed on Monday morning in route to New York City. There were approximately 207 passengers, in addition to crew members, on board the train which veered off its tracks near Spartanburg, South Carolina. Amtrak confirmed that all cars remained in an upright position during the derailment resulting in only a few minor injuries.

The train departed New Orleans on Sunday but never made it to New York. Early Monday morning many were shocked and scared as bags became disheveled and passengers found themselves holding on to each other on the panic swarmed train.

One passenger said the car she was in felt like it was about to flip over. She said she was so afraid and held onto her brother for dear life as bags flew everywhere.

Although many passengers found themselves stuck for hours on the disabled train, Amtrak officials were busy scrambling in order to make other arrangements to get them to their desired destinations.

Two of the train’s cars remained on the tracks and no cars overturned, according to Barnett. Only four passengers had to be taken to a nearby hospital after receiving minor injuries.

The trains came off the tracks and landed on gravel in a rural area of South Carolina. Firefighters, police and railway officials were all among the first to arrive to the scene. Work crews were also at the scene trying to decide how they would clear the area.

Carrie Lambert, another passenger, said she was at the rear of the train when she felt the first sway and then it started to tilt. She said the weather outside was frigid and only two of the cars had heat as they waited hours in the dark for alternate transportation to arrive.

WYFF-TV reported that passengers were stranded for nearly eight hours before they were removed from the disabled train and put on buses to continue their journey.

According to Amtrak the train was due in New York City Monday afternoon. Buses arrived to the scene approximately 7:00 a.m. to gather and redistribute the displaced passengers. These buses made the regularly scheduled stops once they left the Spartanburg area; many passengers were taken to Washington, D.C. in order to be placed on other trains in efforts to get them to their destinations.

The incident is being investigated by Norfolk Southern, The Federal Railroad Administration and Amtrak. Norfolk Southern owns, maintains and controls this sect of the Crescent’s route.

Robin Chapman, spokesman for Norfolk Southern, said that one of the two parallel tracks was open in the area allowing other trains to continue to travel through the area. Chapman said conductors are “crawling” through the area around the accident until the tracks are repaired and everything is back to normal.

Chapman said although 79 mph is the normal track speed in that area he wasn’t sure how fast the derailed train was going when it left the tracks. He also mentioned that damage was done to the rails, but did not share details.

An Amtrak train veered off the tracks on Monday morning in route to New York City. There were approximately 207 passengers and 11 crew members on board when the train derailed near Spartanburg, South Carolina. Four passengers were taken to an area hospital for minor injuries and all passengers have been safely rerouted to their destinations.