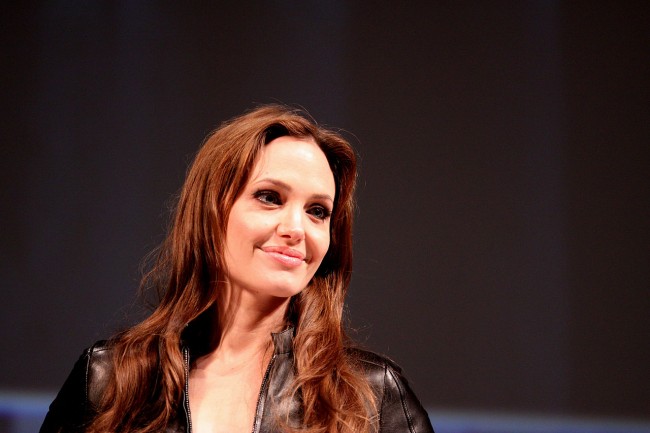 Angelina Jolie the humanitarian received an honorary Oscar late Saturday for her altruistic work. She received her award alongside Steve Martin, Angela Lansbury and Italian costume designer Pietro Tosi. Jolie arrived at the event with fiancé Brad Pitt and their oldest son Maddox.

The awards night appeared to be an emotional one for Jolie. A woman who has traveled to many war-ravaged and impoverished countries to offer aid and comfort, Jolie took care to acknowledge the people she has met overseas. Jolie also mentioned her mother Marcheline, who died of cancer in 2007.

To the audience last night, Jolie said, “She did give me love and confidence, and above all, she was very clear that nothing would mean anything if I didn’t have a life of use to others.”

Jolie also earned an Oscar for her role in “Girl, Interrupted,” in which she played a mentally ill patient in a psychiatric ward. That role also nabbed Jolie a Golden Globe and a SAG Award.

Like her mother, Jolie trained as an actor at the Lee Strasberg Theatre Institute. Jolie starred in some well-noted films such as “Beyond Borders,” “A Mighty Heart,” and “Changeling,” but her heart eventually was tugged elsewhere.

Jolie’s interest in humanitarian work was sparked when she starred in “Lara Croft: Tomb Raider,” which was filmed in Cambodia. She was enthralled by the country’s beauty but also recognized its poverty. Thus, in 2001, she began doing humanitarian work around the world, and became Goodwill Ambassador for the United Nations High Commissioner for Refugees (UNHCR). She has traveled to Darfur, Sierra Leone, Cambodia, Tanzania and Pakistan. Jolie’s good works are funded by her acting roles, which helps her pay one third of her earnings toward her works of goodwill.

Jolie is a public figure many young girls can look up to. Of course, she’s famous and beautiful and has a lovely fiancé and children, but she’s much more than that. She genuinely cares about the impoverished and the disadvantaged, and makes a point of spreading her wealth around. What’s more, she realizes she is lucky to be in the position she is and takes her role as philanthropist seriously. With her fiancé Pitt, she established the Jolie-Pitt Foundation, which focuses on eradicating rural poverty, and protecting our wildlife and natural resources.

Jolie has a special place in her heart for children. The oldest three of her children are adopted: Maddox, Pax and Zahara. She gave birth to her fourth child, Shiloh, and then her twins, by Caesarean section. She might have more children in the future although she has said:

“We want to make sure we don’t build a family so big that we don’t have absolutely enough time to raise them … Children are clearly a commitment, a bigger commitment [than marriage]. It’s for life.”

Jolie’s causes range from abuse to AIDS/HIV to poverty to education. Her interests are wide ranging and wherever she travels, she is warmly welcomed. She will be an important public figure for a long time to come.

Look to the Stars