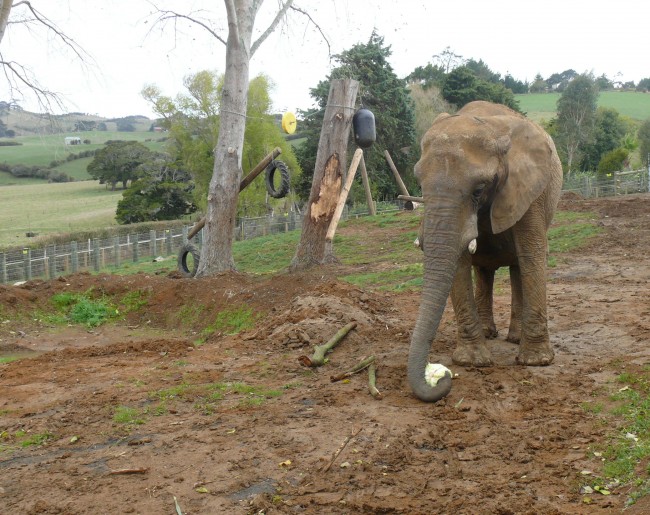 On Thursday, San Diego Zoo was happy to welcome Mila, a 41-year-old African elephant, who has just traveled all the way from Franklin Zoo & Wildlife Sanctuary in New Zealand to their care.  The reason for her change of venue is that the Franklin Zoo has been permanently closed down after the death of its founder and elephant project manager, Dr. Helen Schofield in a tragic accident.

Since retiring from the Loritz Circus almost four years ago, Mila has been cared for by the Franklin Zoo.  After being the lone elephant in the circus and forced to perform in various animal acts, she has required extensive rehabilitation to not only rebuild her confidence but also to teach her how to make her own choices in life.  She also underwent much required physical training to increase her muscle strength and fitness.

The video at the end of this article shows Mila (at that stage called Jumbo) in a tragic state, as she was first taken from Loritz Circus to the Franklin Zoo.

Reportedly the system of positive reinforcement used for Mila was both developed and pioneered by San Diego Zoo Global in order to set standards for the training of elephants living previously under unnatural conditions.  Hence the best place for Mila to relocate to was San Diego Zoo itself.

Originally, when Loritz Circus tried to find a home for Mila, Franklin Zoo Charitable Trust was the only facility in Australasia willing to take on her cause and to ensure that she would have a future in the company of other elephants.

Mila was doing well under the watchful eye and care of founder and elephant project manager, Dr. Schofield but tragically Mila accidentally killed her handler, leading to the Franklin Zoo being closed down.

The other 420 animals in the zoo’s care had already been rehomed in previous months, leaving Mila the elephant alone on the premises.  She has now finally completed her travels and arrived in her new home in San Diego Zoo on a special charter flight from New Zealand, arriving on Thursday to a warm welcome.

The elephant will be kept in quarantine at the zoo for a couple of months and will be kept physically separate from other elephants.  However, she will be allowed to communicate with them to a certain extent and to smell them.  Once the quarantine period is over Mila will hopefully slowly be introduced to the other female elephants in the facility.

The elephant couldn’t be in a better place than the San Diego Zoo.  The zoo comes under the wing of the San Diego Zoo Global Wildlife Conservancy, which dedicates itself to preserving endangered species and also wherever possible to bringing them back from the very brink of extinction.

Other facilities coming under the Conservancy are the San Diego Zoo Safari Park, San Diego Zoo Institute for Conservation Research and field programs in around 35 other countries worldwide.

Mila’s many fans from both the former Franklin Zoo in New Zealand and at her new home in San Diego wish the elephant a long and happy life following her travels halfway across the world.