Iran Talks Dead in Their Tracks 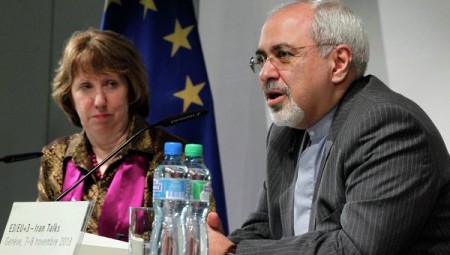 The ongoing nuclear talks in Iran have stopped dead in their tracks after another snag, despite an optimistic outlook earlier this week. According to reports from diplomats, the Iranian government has insisted that the interim agreement on Iran’s nuclear program contain language that states that Iran has a “right” to enrich uranium, a requirement most world powers are less than eager to stomach.

The marathon sessions earlier this week produced a degree of positive outlook until countries like France and Iran haggled over nuanced wording of the agreement in recent days. The talks which were hailed as breakthroughs by officials and diplomats are growing more bleak by the day, with lower-level negotiators set to take on the burden of the talks in 10 days for further discussion.

France has taken the hardest line against the Iranian nuclear program. The talks in Geneva were set to come to a close until France announced it was prepared to stop the deal, preventing the halting of western backed sanctions which Iran was hoping for. In light of France’s defiance, Iranian businessmen are considering reducing trade ties with Paris based firms.

Iran’s state news agency Irna reported that “A group of Tehran-based industrialists held a meeting here on Sunday focusing on reduction of Tehran-Paris trade ties.” The group said that the “imbalanced policies” of Paris on Tehran have muddied the good economic partnership held between the two countries prior to the talks.

Hassan Rouhani, Iran’s president commented on the events in Geneva, saying that Iran would not bow to “sanctions, threats, contempt and discrimination.”

The talks have all but stopped in their tracks since the Tehran-Paris affair, but matters have only gotten worse since Tehran itself has had issue with the agreement’s details.

According to American officials the six world powers presented a draft which was wholly balked at by the Iranians, who went back home to their government to discuss the deal further.

“It was too touch for them,” said Mr. Keinon of the Jerusalem Post, who was in attendance at the briefing.

Iran’s foreign minister tried painting an image of like mindedness in the talks, saying that the countries involved were all “on the same wavelength,” and that talks would not be halted as a result of the agreement’s discrepancies.

The failure of the Geneva talks have provided fuel for anti-Iranian sentiment in Congress, saying the talks were doomed to begin with and that tougher sanctions should be placed against the Islamic Republic of Iran.

Amongst those opposed to the talks is Senator Bob Corker of Tennessee, a senior Republican on the Foreign Relations Committee. In a statement on “Meet the Press”, Senator Corker said that the Obama Administration in negotiations with Iran is “dealing away our leverage,” For now the talks with Iran are dead in their tracks, that is until new wording can satisfy the parties involved.

Talks with Iran and American leaders are among the first in decades since Jimmy Carter dealt with the western backed Shah of Iran prior to the 1979 Iranian revolution. Since the overthrow of the Shah’s government, all diplomatic ties between the two states were severed.