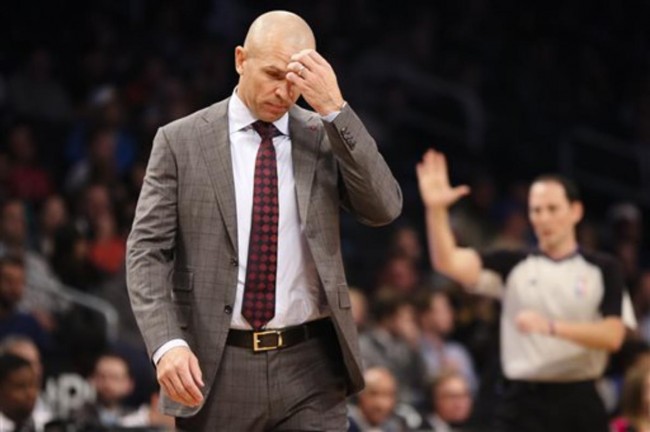 Jason Kidd has been fined $50,000.00 for purposely spilling his soda on the court during a game between his Brooklyn Nets and the Lakers on Wednesday.  The ex-player, who is now trying his hand at coaching, dropped the soda on the court in order to take advantage of the free timeout (to clean up the spill) to draw up a final play.  Mike D’Antoni, coach of the Lakers, criticized Kidd for the move, but Kidd did not apologize, saying that his ruse on Wednesday was just part of being a coach.

The soda was spilled during the final quarter of Wednesday’s game, in which the Nets lost to the Lakers 99-94.  The Nets had no timeouts remaining with eight seconds left in the game and were trailing 97-94 when Jason Kidd put Mirza Teletovic in and pulled Tyshawn Taylor while the Lakers’ Jodie Meeks was on the line preparing to take a second free throw.  A number of people who saw the play claim that they were able to read Kidd’s lips as he said “Hit me” to Taylor.

On Taylor’s way back to the bench, Kidd, with a plastic cup of ice and soda in his right hand, begins a conversation with Taylor.  During the conversation, Taylor bumps into Kidd’s arm, which spills his soda onto the court.  Kidd bends over to scoop up the ice and the cup when a game official stops the game to allow the mess to be cleaned up by arena staff.  As the soda is cleaned up, the Nets take the opportunity to huddle up and design a play for a three-point shot to tie the game.  For his part, Taylor denies that the soda was spilled intentionally.

Although Jason Kidd originally blamed the spilled soda on “sweaty palms,” he admitted Friday, after the NBA’s fine was made public, that he had done it purposely.  He confessed that the league was correct to fine him for “something I probably shouldn’t have done.”  When faced with the question of whether or not he had learned something from his action and the subsequent fine, Kidd said, “No.”

Kidd confessed that he learned the tactic from owners and coaches through the NBA.  Mark Cuban, controversial owner of the Dallas Mavericks, supported Kidd’s claim by tweeting a video of the Chicago Bulls doing the same during a game against Dallas in 2009.  Jason Kidd played point guard with the Mavericks at that time and was on the court during the final seconds of overtime when a soda was spilled by Del Harris, the Chicago Bulls coach, which caused a delay in the game.  Regardless of who was the first to resort to this tactic in order to score a free timeout, Kidd is the first coach to get caught doing so.

As for D’Antoni, who appeared to raise his hands out of frustration as the soda was being cleaned from the court, he stated that Jason Kidd’s tactic of spilling soda on the court on purpose was “crazy.”  Desperate times call for desperate measures, and Kidd and his Nets, with a record of 4-11, are certainly desperate as each loss brings more scrutiny on the first-year coach and his high-salaried team.  Struggle is nothing new for Kidd during his first year as a coach, as he was suspended for the first two games of this season after he pleaded guilty to drunken driving.
By Jennifer Pfalz
New York Daily News
WBIR
The Alpena News
Sports Illustrated