Jennifer Lawrence New Do or Dont?

Was her short hair a good idea? 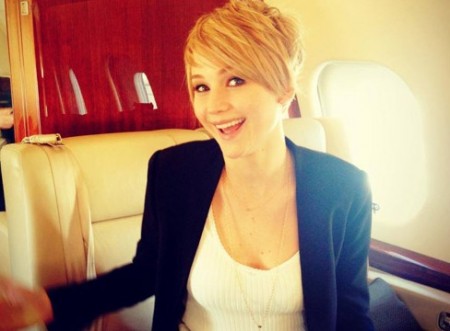 Who isn’t familiar with The Hunger Games Star Jennifer Lawrence and her new hair do… or is it a dont? Jennifer Lawrence fans everywhere chime in on Jennifer’s new look as she sports a pixie style haircut. Social medias all over are tuning in on the status of her lopped locks and speculate her reasoning behind the drastic change. As she posted photos on Facebook over 2.5 million followers jaws dropped as they got the surprise of their lives. The photos capture Jennifer Lawrence, apparently completely satisfied with her spontaneous decision to cut it all of in an adorable and tasteful blonde pixie cut. If she is happy then we should be happy too, right?

Surprising fans and paparazzi as she is out and about promoting the release of the next film in The Hunger Games series The Hunger Games: Catching Fire, many were trying to guess if it was a wig or a real haircut. Some guess that Jennifer Lawrence is sporting the ‘no fuss’ hair do while she tours or that perhaps it makes it easier for the braided hairstyle she wears during filming. Jennifer Lawrence later admitted that as it grew out it felt and looked gross as the layers had grown out unevenly, so she chopped it all off. Adoring fans will either love it or hate it, but thankfully the producers of The Hunger Games films were seemingly okay with the surprise of seeing Jennifer’s blonde locks shortened considerably. No worries though, thanks to advanced make-up and techniques for altering the looks of actors, Katniss Everdeen will still be sporting the long  dark brown braided hairstyle as she fights for life in the sadistic rounds of games. Hopefully the impulsive decision to get her ‘ears lowered’ so to speak doesn’t bite her in the fanny, as hairpieces can be just as cumbersome.

While sporting her new hairdo, Jennifer Lawrence is set to reprising her role in the new film X-Men: Day of the Future’s Past and in the movie The Ends of the Earth, set to hit big screens in 2014. In lieu of working on other projects Jennifer Lawrence will be continue working on the set of the third and last installments of The Hunger Games series. The last parts of the trilogy The Hunger Games: Mockingjay Part I and Part II, will be released in two parts some time in 2015. Perhaps the short hair will indeed be a blessing with such a strenuous filming schedule, it could be one less thing to worry about besides her morning cup of coffee.

Jennifer’s lack of locks is sure to not affect her continuous performances after the fact. Fans will look past the absence of hair and continue to support her throughout her career. No matter she is still stunning regardless. Long hair, short hair, or no hair…well, okay maybe not, but people will always love Jennifer Lawrence; her winning performances and personality on the big screen as well as in person. So, Jennifer Lawrence, hair do or hair dont, we still love you.