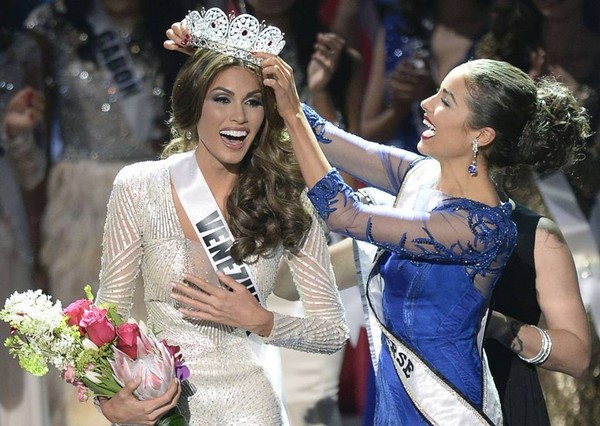 Tonight marks the 62nd Miss Universe Pageant, and the winner 0f the 2013 edition will come from one of the over 80 countries who have competitors entered. The winner was Miss Venezuela, Maria Gabriela Isler. The co-hosts will be Thomas Roberts of MSBNC and Mel B. The eight judges include Steven Tyler, lead singer of Aerosmith. The pageant is held in Moscow, Russia, at the Crocus City Hall. It was been hyped as being “live” but it’s actually prerecorded.

The Miss Universe 2013 Pageant opened with a dance troupe performing; then, we met the contestants, each dressed in elaborate, beautiful costumes/dresses representing their countries . It took awhile to introduce them, as there were so many; but, they were all lovely, and represented their countries with pride.

Miss Philippines got a ton of applause. In part, that  because of the devastating typhoon that has caused so much destruction in that island nation. Miss Russia, naturally, also got quite a lot of applause, as Russia is where the pageant is taking place.

Mel B: “This is going to be an incredible night.”

Roberts said that there are one billion people watching the Miss Universe Pageant all around the world. Thomas Roberts dedicated the Miss Universe 2013 Pageant to the people of the Philippines. Then, we had the first commercial break of the evening.

Then, there was a short tour of Moscow show, where the contestants traveled to various tourist destinations in Moscow. Miss Universe Nicaragua won. They ended the day at a famous nightclub, where Emin performed and sang a song in Spanish. Another commercial break followed.

I’m looking forward to seeing Panic! At the Disco perform later tonight, and the panel of judges hasn’t even been introduced yet. I’m guessing that they will be right after this batch of commercials.

Roberts introduced Miss Universe 2012, Oliva Culpo, from Rhode Island, USA. She was dressed in a stunning white gown, and she narrated a segment were the Top 5 costumes and the women wearing them was featured. The Miss Universe 2013 Pageant went to commercials with the latest Mel B song playing.

Round One, the Swimsuit Competition, was next up on the Miss Universe 2013 Pageant. Panic! At the Disco performed in the midst of the bikini-clad beauties, who did a somewhat awkward choreographed dance number to the music. They performed the songs Miss Jackson and I Write Sins Not Tragedies.

Brief vignettes of the Top Ten finalists then were shown, with them talking about themselves. Miss India seems to be quite intelligent; she’s a Communications Engineer. Miss USA, Erin Brody, talked about volunteering for Habitat for Humanity. Miss Valenzuela, (Maria) Gabriela Isler, talked about loving to dance. She also works for the Venevision channel in her country as a news anchor.

After more commercials, there was the Evening Gown competition category of the Miss Universe 2013 Pageant. Thomas Roberts should they were “about to turn up the glamour.”

Mel B welcomed international recording artist, from Russia, Emin, who performed in the midst of the remaining ten contestants, who were dressed in lovely colorful evening gowns. He sang in English — I had never heard the song before, but it sounded pretty good.

After we got a “Sneak Peek” at the making of the Million Dollar Swimsuit, Miss Universe 2012, Olivia Culpo,  came onstage wearing it,. The white swimsuit was studded with emeralds, diamonds, and rubies, and it travels with an armed security guard.

More commercials followed, and after them, the Final Five were announced. They were Ecuador, Brazil, Spain, Miss Philippines (there were lots of cheers when her name was announced), and Miss Venezuela (she also got lots of cheers and applause).

The judges then asked the Final Five competitors Interview questions, The women pulled out cards with the names of the judges who would ask the questions written on them.

Miss Ecuador was up first. She drew a card with Philip Kirkorov’s name on it. He asked her “What would happen to the world if we could no longer use the Internet?”

Miss Ecuador drew next. Carol Alt asked her  about her opinion about countries which limited women’s rights. Miss Ecuador answered that women still have some problems with their independence in some countries, but they are homemakers, workers out in the workplace, and in her country, a female is the president.

Miss Spain drew a card with Anne V’s name on it. Anne V asked her about women in politics. Miss Spain said that a woman in politics needs to possess certain qualities that would help her be a better politician, and she named some of them.

Miss Philippines drew Tara Lipinski’s card. I didn’t hear what the question was, but the audience seemed to like the answer that Miss Philippines gave, and they cheered and applauded loudly.

Steven Tyler asked her what is her biggest fear, and how did she plan to overcome it. She said that: “Fear is not negative.We should overcome all our fears and this in turn would make us stronger. As soon as we overcome our fears we can face any challenge.”

Miss Ecuador, Miss Brazil, Miss Spain, Miss Philippines, Miss Venezuela were again brought on the stage, and the narrator talked about each one briefly. Thomas Roberts announced that Steven Tyler would perform right after the next commercial break was over.

Steven Tyler dedicated the classic Aerosmith song Dream On to the Final Five competitors. He played the piano as he sang, and his voice still sounded great as he sang. Tyler then got on top of the piano with his microphone to sing. The audience really got into the song; he gave an amazing performance and got a standing ovation from the audience.

Next, we had a glimpse back into what the past year was like for Miss Universe 2012, Olivia Culpo. She called it “an unbelievable experience” and said that “it changed my life in a million different directions.” She then gave thanks to everyone who had helped her become Miss Universe. Robert Thomas said that Miss Universe 2013 would be announced after the next commercial break.

Thomas Roberts and Mel B thanked everyone who were responsible for putting on the Miss Universe 2013 Pageant, Mel B said Brazil was the fourth Runner-up. Miss Philippines was the third , the second was Ecuador, Spain was the first Runner-up, and…Miss Venezuela won! Maria Gabriela Isler is Miss Universe 2013!