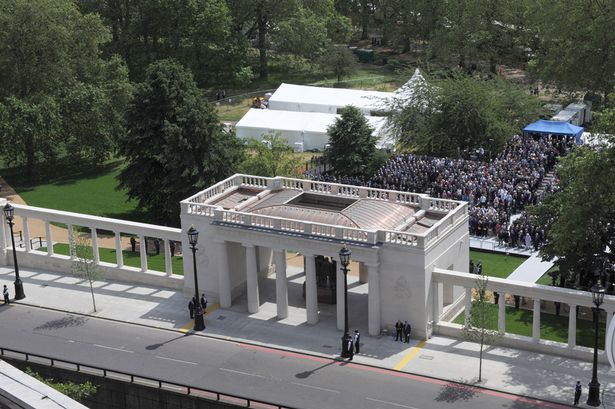 An impromptu expression of opinion on an imminent murder trial  in the United Kingdom (UK) has caused authorities to imprison the vandal who admitted to posting the graffiti.

Daniel Smith, of Salford, Lancashire, sprayed the words, “Lee Rigby’s killers should hang” on the side of a building in London. Graffiti in itself is a rather venial offense, typically resulting in fines. However, the issue arose from his choice of canvas: the RAF Bomber Memorial, a national landmark that honors the fallen pilots and air crew of World War II.

The defacing of the memorial deeply offended the living veterans, the families of the war dead, and the public at large. This is not to say that many do not agree with his sentiment. Lee Rigby, a 25-year-old man who was enlisted with the Royal Regiment of Fusiliers, 2nd Battalion, was returning from a tour of the Tower of London when he was attacked and murdered outside of the military barracks in Woolwich on May 29th of this year. Michael Adebolajo and Michael Adebowale are accused of using knives and machetes to hack the young soldier apart. The motive seems to have been a product of free-floating rage against the British military. Both of the assailants, Nigerian nationals, were known to consort with radical Islamist groups that had been banned from English soil over concerns for national security. Rigby, a military drummer, seems to have merely presented an opportune target as the men lurked outside of the barracks.

The incident sparked a wave of emotion in the UK due to both the brutal nature of the murder and the apparent randomness of the attack. District Judge Quentin Purdy, the judge who has been appointed to preside over the upcoming trial, scheduled to start within the next two days, has requested a media blackout in order to quell public outrage as details come to light.

All of this has done little to help Smith’s case. The 21-year-old graffiti artist expressed his opinion on the murder trial all over Royal grounds, which requires a minimum term of imprisonment. Smith has spent the past 11 weeks behind bars as he awaits sentencing for his guilty plea. It also booted him none that he wrote “F*** the Police” a short distance away from his criminal polemic. Smith’s only real defense has been that he was somehow not aware that the building he tagged was a WWII monument.

The bill for the damage Smith cause came to approximately £870. This follows an earlier conviction for a similar offense in which the graffiti artist did £510 of property damage to a Knightsbridge shop. All told, Smith has amassed 44 convictions on minor offenses during his short career.

Nevertheless, Smith may still catch a break for his most recent malfeasance. As the trial of those who committed Lee Rigby’s murder looms, Purdy showed signs that he is aware of the charged emotions coloring a simple vandalism case. He indicated during the short trial in which he accepted Smith’s guilty plea that Smith may end up with only a suspended sentence, meaning that the convicted man will stay out of prison if he can otherwise remain out of trouble.

The final sentencing has been delayed as the court evaluates hostel accommodation for Smith’s bail. For now, Smith – like the perpetrators of the murder that prompted his outraged and outrageous graffiti – continues to sit behind bars.