Redistricting a Threat to American Democracy 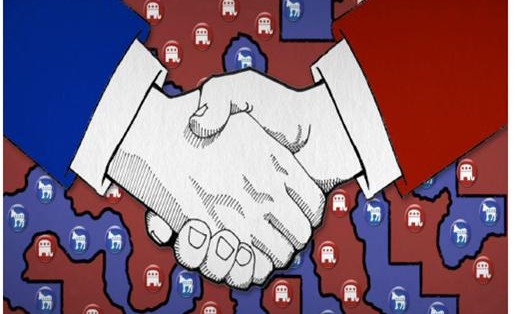 To understand how redistricting has become a threat to American democracy, one must navigate the complex and often vaguely defined functions of government institutions and practices. In doing so, one would be hard pressed to find a cogent solution to the troubles inherent in governing over a democratic society. And while no government is wholly free from the vices of power and greed, and no democratic society immune to the illegalities slipped into the crevices of legislation, the informal yet widely practiced institution of redistricting is commonly overlooked and often ignored by a majority of American voters. The practice of “Gerrymandering”, dates back to 1811 when Elbridge Gerry, Governor of Massachusetts, signed a redistricting bill carving a serpent like shape out of an electoral district. At first it was meant to help ease the growing pains of a newly formed democracy. The goal in mind for those who were in favor of Gerrymandering or redistricting was to limit the amount of competition for an electoral district as to exclude unsympathetic voters while retaining sympathetic voters for a particular party. The overarching goal was to help maintain stability in the governing process, and ensure those voting in a district would be ‘represented in whole’ without excluding a 30-40% voter population. To put it as simply as possible, if an electoral district was more homogeneous, there would be less conflict, and more adequate representation for those in that district who voted for the ruling party.

The way Gerrymandering works is like this: One hundred people live in a particular area. 60 of them registered Democrats, 40 of them registered Republicans. What Democrats (and any party in this situation) will want to do is to have the district lines drawn in a way that basically kicks out a majority of those Republicans and lumps them into a surrounding district, making the new electoral district 60 Democrats and only 20 Republicans, making their odds at winning even better.

This does not sound too bad, one could argue, because at least those 60 Democrats are being represented and those other Republicans who were pushed out may have a better shot at being represented in another district. That would be the case, if this was the limit to Gerrymandering’s potential. Yet, as is often symptomatic with politics, there’s much more to it than just that.

Take the same example; 100 people, 60 registered Democrats, 40 registered Republicans. Republicans (and any party in this situation) will want to do is make sure they can get into government, so they’ll have the electoral lines drawn to take those Republicans out of the district and either from their own independent district, or from multiple districts comprising of majority Republicans, allowing more representation. There might even be an instance where there is an equal amount of voters on both sides, yet the lines are drawn to favor one party (as show in the image above). But for this example, lets say Republicans pulled 30 of their 40 into a new district. This new district would have 1 representative for 30 people, while the altered original district would have 1 representative for 70 people. On such a small scale this doesn’t like that big of an issue, but when applied in real population numbers, It would be a new district of 150,000 people with 1 representative and 500,000 people with the same amount of representation. While these numbers are merely hypothetical and are used for the sake of an example, the fact remains- there is an unequal amount of representation for what are otherwise considered politically equal citizens. 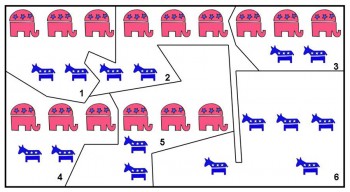 In 2002, only 6 states had independent commissions to devise the electoral lines based on census data. That means almost 90% of the states have electoral districts drawn by those who benefit off of the results of those lines drawn. Simply put, politicians are put in charge of whether or not they should keep their job, aka, get re-elected.

This is a seriously troubling phenomena. A majority of these gerrymandered created candidates are not held accountable for their actions on the national stage. As we have witnessed with the government shutdown of 2013, these politicians have little to worry about- their seat is safe at home, as long as the gerrymandered lines of their electoral districts remain in place. More often than not Republicans are the ones who usually benefit off of this system because their voters tend to be scattered and rural, making their electoral districts large enough to be considered valid, but scarce enough to be hardly representative of the average electoral district. It also just so happens that Republicans are the ones who are usually in favor of this system, and use this system to push through nationally unpopular legislation while pandering to a small, sometimes radical, constituency at home.

These electoral lines have been drawn not for the sake of stability, but for the sake of the career politician. This clever and virtually unknown way of securing political power is something that has helped maintain the status quo in Washington and has lent some serious fodder for its dysfunction. Until electoral lines can be drawn by independent commissions based on census data and without partisan bias, redistricting will continue to threaten American democracy, and Congress will have no incentive to comprise itself of its people and their interests, but instead of their own perpetual incumbencies.