Religious Freedom Under Attack Again in US 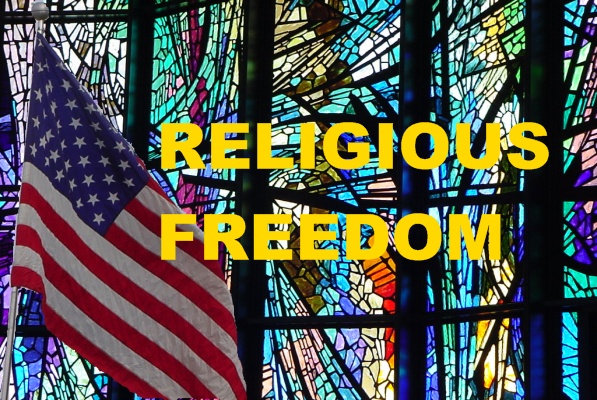 Religious freedom is under attack once again in the US. One of the cases before this session of the Supreme Court of the United States is the latest to deal with religious freedom issues.The Town of Greece, N.Y. v. Galloway deals with Greece, NY a town in upstate New York and their policy of saying a prayer before each of their public meetings. Two individuals filed a suit against the town to stop this practice. The town did institute a rotating system for each of the churches in the town to participate, but the plaintiffs argue that the greatest percentages of prayers are Christian.

There has been a concerted effort in the past few decades by atheist groups to remove religion from all public life, whether it is the removal of prayer before public meetings, removing Christmas displays in the “public square” or removing words like “God” and “Jesus” from any sign, banner or monument which may be seen by the general public. Atheist groups have used the First Amendment of the United State Constitution claiming it calls for the “separation of church and state.” The problem is there is no such clause in the First Amendment. What the First Amendment does say is:

“Congress shall make no law respecting an establishment of religion, or prohibiting the free exercise thereof; or abridging the freedom of speech, or of the press; or the right of people to peaceably to assemble; and to petition the Government for a redress of grievances.”

What people are referring to when they cite this invisible clause is a letter Thomas Jefferson wrote to the Danbury Baptist Association where he affirmed that:

“I contemplate with sovereign reverence that act of the whole American people which declared that their legislature would ‘make no law respecting an establishment of religion, or prohibiting the free exercise thereof,’ thus building a wall of separation between Church and State”

What people fail to understand when they use this letter as a basis for their argument is that Jefferson was affirming the Baptists had the right to practice their faith the way they wished. What was happening at the time of this exchange was the Connecticut legislature had established a state religion and the Baptists were seeking clarification on whether they could do this or not (see reference below for a link to both letters).

The first question is what does “establishment of religion” mean and what constitutes the making of a law? Is allowing a prayer before a public meeting “establishing” a religion? Is allowing a display of a manger or a menorah “establishing” a religion? Does allowing these things constitute “making a law?” This session of the Supreme Court will decide this week in the Greece case. Another recent case in Washington State brought by a homosexual couple against a florist for not selling them flowers for their wedding is also an example of the government intruding on a person’s religious beliefs. The owner of the store, Barronelle Stutzman, refused to sell flowers to the couple because gay marriage was against her religious belief that marriage should be between a man and a woman. Washington has a state law which makes it illegal for anyone to refuse to do business with gays. Therefore they have effectively passed a law prohibiting someone’s religious freedom.

Are we removing God from our lives?

The bigger question is whether or not this is a part of a broader and conscious effort of removing God from the public square and is it working?

A recent report by the Pew Research Center shows that the number of Americans who do not identify with any religion is growing. According to the report one fifth of American adults identify themselves as “non-religious” and a third of adults under the age of 30 saying they are “religiously unaffiliated.” This is an increase of over 15% in the last five years. Could the United States Government be partly to blame for this rise?

The Pew study states one reason could be “generational replacement” meaning some of the people interviewed in this study were not old enough (over 18) to be interviewed in the last study, five years ago. It appears that they might not being raised in homes where religion is not either practiced or talked about. Two-thirds of Americans say religion is losing its influence in this country with the majority of them thinking this is a bad thing. The research did not go into there were any specific ways causing this influence loss, although those who consider themselves democrats are more likely to be religiously unaffiliated.

Out of Sight, Out of Mind

There is an old adage which states “Out of sight, out of mind” which very well could apply here. If references to God are removed from any place people gather publicly, could this influence their attitudes toward God? After all if we remove God from our society then those who wish to can substitute their own moral code for God’s. Two perfect examples of this are the legalizing of abortion and the legalizing in some states of euthanasia. Both of these legalize the taking of human life, certainly against the laws of God. There are plenty of arguments the supporters of these positions use to rationalize why both abortion and euthanasia are good to have, which is exactly the point, we have taken God from the argument and substituted other moral principles, such as some lives are expendable.

Could it also be that people are afraid to let others know they believe in God? Are they afraid someone will file a lawsuit against them for being religious, or as in the case with the lawsuits against the HHS mandate which requires all employers to provide contraceptive coverage and “day after” abortion inducing drugs to their health insurance, at the employer’s cost, the government forcing them to “not believe” establishing a religion of “non-religion?” The cases against the HHS mandate could also be decided in this session of the court.

Freedom of, not from Religion

The First Amendment uses the words “freedom of religion” not “freedom from religion” which is what the opponents of religion would like you to believe. This country was founded on religious principles, the early settlers came here fleeing religious oppression in England. Evidence can be found in many of the writings of the Founding Fathers, in the Declaration of Independence and the Constitution.

“… that Almighty God hath created the mind free, and manifested his supreme will that free it shall remain by making it altogether insusceptible of restraint; that all attempts to influence it by temporal punishments, or burthens, or by civil incapacitations, tend only to beget habits of hypocrisy and meanness, and are a departure from the plan of the holy author of our religion…” – Thomas Jefferson, Virginia Statute for Religious Freedom

Why would there be a concerted effort to remove religion from our society? Here is one quote which could explain it:

“…communism abolishes eternal truths, it abolishes all religion, and all morality, instead of constituting them on a new basis…” – Karl Marx and Friedrich Engels “Manifesto of the Communist Party”

Could this be part of a bigger plan by the progressive movement in this country, one to move us to a socialist nation? We are seeing other signs this could be happening, make up your own mind.

Religious Freedom Under Attack Again in US added by Paul Roy on November 2, 2013
View all posts by Paul Roy →