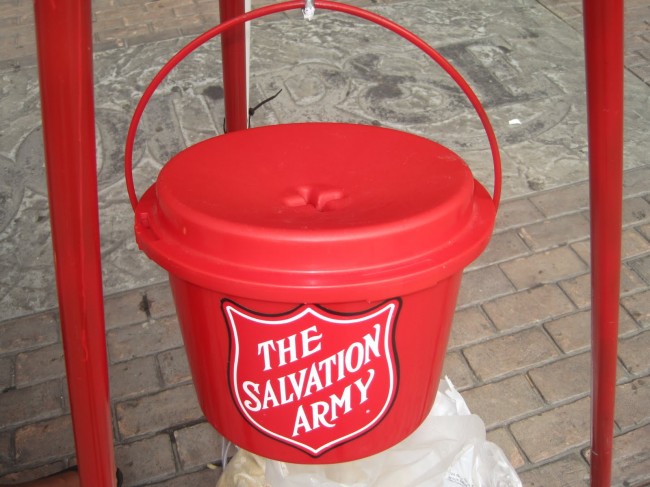 ‘Tis the season to be jolly, to care and share and not exemplify folly. Unfortunately, not everyone lives up to that motto. The Salvation Army’s red kettle was swiped by a thief in Winston Salem, North Carolina, at the Hanes Mall Belk store on the eve of Thanksgiving Day, and investigators have no leads.

According to reports received by Winston Salem police, the red kettle, valued at $75, contained approximately $50 in donations. Bell ringer James Griffin briefly stepped away from the kettle to assist an elderly woman coming through the double-doors of the Belk store. Upon returning to his post, Griffin realized the kettle was gone.

Griffin told police that he did not see who took the kettle and that he is “disheartened” that someone stole “his hard work.” It was rainy and cold at around 3:15 p.m. when the incident unfolded. Lt. Brad Yandell has confirmed that no description of the thief and no surveillance of the theft exist.

Commander Major James Allison, of the Winston Salem Salvation Army division arrived on the scene with a replacement kettle. He expressed disbelief that anyone would steal the kettle. Allison pointed out that the Salvation Army raises money to help those in need. If the thief was in need, the Salvation Army would have gladly helped that person.

Major Allison said, “We have no animosity toward the person who stole the money. We wish them a happy holiday, but taking money from someone else is not the way.”

Conversely, an exemplary example of giving came from Belk’s store manager Julia Outlaw who donated $100 when Major Allison replaced the kettle. Hopefully this good deed has sent forth the right message, especially after Salvation Army’s red kettle was taken by the unknown thief.

Griffin resumed his position on Wednesday as bell ringer for the second year, and continued to greet shoppers and graciously accept their donations. Of the cause, Griffin said that the ringing of the bell in the city is a call to help “24,000” people and “10,000” children throughout the county. “We are trying to feed, clothe and provide Christmas toys to these kids,” said Griffin.

That is the general spirit of  thoughtful givers during Christmastime, when they come upon Salvation Army’s red kettle collecting money for the less fortunate in our communities.

The Salvation Army has been around since 1865. The not-for-profit was, first formed in London by  Methodist minister William Booth and his wife Catherine, under the name East London Christian Mission.  The East London Christian Mission saw its name change to Salvation Army in 1878, when Booth’s son, Bramwell, pointed out that the organization was more than just for “volunteering,” it was for “salvation.”

The Booths agreed with their son and swapped the term “volunteer” with that of “salvation.” They modeled the Christian-based mission Salvation Army after the military, and thus the soldiers’ ranks, General,  Captain or Major, and the uniforms worn by those in “God’s Army,” for ministry work and meetings.

The red kettle came into use in 1891, in San Francisco, when Captain Joseph McFee found himself overwhelmed with the number of poor people in that city. His wish then was to provide 1,000 of the poorest people with Christmas dinners as a way to spread holiday hope to them, but he had no money.

The former sailor recalled that in England a certain organization setup a large kettle near the docks and passers-by would drop coins into the pot to help the needy.  He then located a pot and placed it at the foot of business-district Market Street, in San Francisco, and by Christmas, he raised enough funds to feed the poor. The tradition rapidly made its way across the U.S., and that Christmas the Salvation Army raised enough money to feed 150,000 people nationwide.

“The Salvation Army, an international movement, is an evangelical part of the universal Christian Church. Its message is based on the Bible. Its ministry is motivated by the love of God. Its mission is to preach the gospel of Jesus Christ and to meet human needs in His name without discrimination.”

“The Salvation Army believes in the sanctity of all human life and considers each person to be of infinite value and each life a gift from God to be cherished, nurtured and redeemed. Human life is sacred because it is made in the image of God and has an eternal destiny. (Genesis 1:27) Sacredness is not conferred, nor can it be taken away by human agreement.”

The Salvation Army’s red kettle may have been swiped by a thief this Thanksgiving holiday, but a lot of good as well reaped for the organization “Doing The Most Good.”