Thanksgiving Complaints: Shoppers Had to Rush Their Dinner 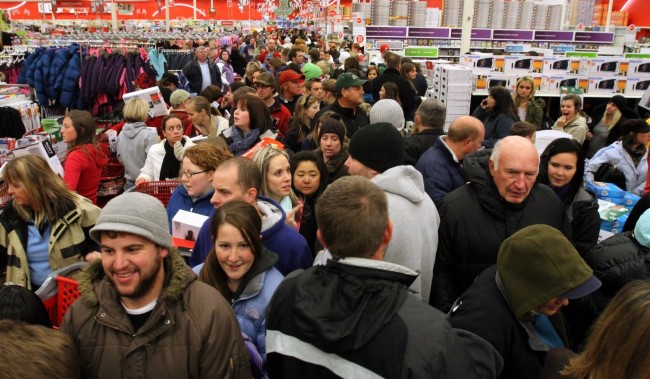 Thanksgiving is supposed to be a day to be thankful and spend time with family. However, the last few years have seen a growing trend of people shopping instead of enjoying a day of rest. The biggest of complaints this Thanksgiving was that shoppers felt rushed when eating their dinner, just so they could get their hands on the best deals.

However, depending on the source you talk to, that seems to be the only complaint, this year. Most shoppers detail how their day was peaceful and it was relatively easy to get their hands on the items they wanted. Whether it will be the same for Black Friday, which is today, is another question.

One man, Dan McLellan was shopping on the newly named Brown Thursday for his wife, who is pregnant. He was expecting chaos and people climbing over others to get their hands on the best deals. At no point in the run up to the doors opening did he think he would get excited and feel the adrenaline rush of the sales. He found the complete opposite, while he searched for the best iPad deal available.

Part of the lack of chaos comes from store management and a change to the opening times. Stores opened earlier this year than most before, although many shoppers seem to have avoided the first opening shopping. Of course, there were some waiting, ready to get the best deals, but it didn’t stop them complaining about feeling like they had to rush their Thanksgiving dinner.

One couple from Ireland came to New York for the sole purpose of the Black Friday sales. They have empty suitcases to fill with anything and everything, which they will be taking back home to use for Christmas presents.

This Black Friday event has been harder than the previous year. Thanksgiving is a week later, meaning there are six less days to get the Christmas shopping completed. Stores have compensated for this by bringing in the deals earlier and opening later yesterday. Macy’s was one to compensate and break the 155-year tradition of closing on this national holiday.

However, there have still been some problems. Brawls have broken out in stores where there has been a lack of management, or where people have simply missed out on the best deal. One incident was in a Virginia parking lot where a man was stabbed by another shopper. Another incident, in Chicago, involved a man being shot by police after an officer was being dragged as the man sped away in a car. Many shoppers worry about the events on Black Friday after yesterday’s madness.

Apart from a few brawls and mad incidents, most of Brown Thursday has gone smoothly. People have gained their deals and stores have dealt with the large number of shoppers. The biggest complaint from shoppers is having to rush their Thanksgiving dinner, but this was due to personal choices. There were plenty of other options for shoppers, including waiting until Black Friday or shopping online and avoiding the brawls.