The Ultimate Fighter 18 Wraps up Saturday 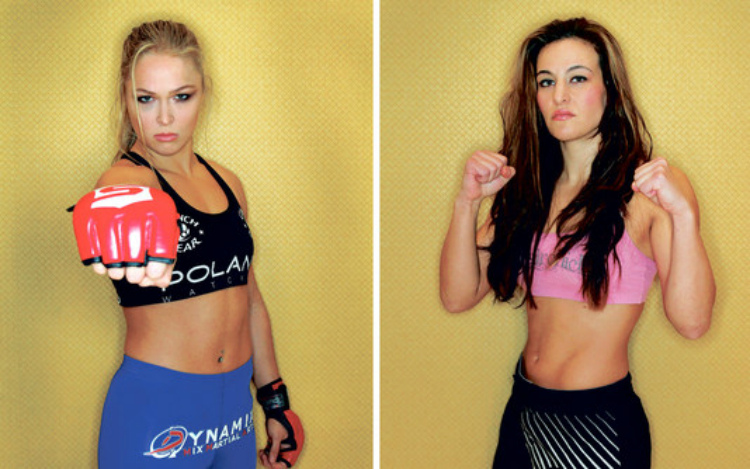 The 18th season of the reality-fight television program The Ultimate Fighter will wrap-up with a finale fight Saturday night. This season of the popular show is the first to ever feature female mixed-martial artists as both coaches and contestants, and marks a deliberate expansion of the franchise to attract female athletes and fans.

Coaches Ronda Rousey (7-0) and Miesha Tate (17-4) brought a strong rivalry to the screen throughout the program’s regular season, and when their respective representatives face-off in the octagon Saturday, sparks are sure to fly. Julianna Pena (4-2) will represent Team Tate in a bout at the 135-pound Bantamweight class against Team Rousey’s Jessica Rakoczy (1-3) as one of the headline fights at The Ultimate Fighter 18 Finale.

The combat sports reality show has awarded contracts to 29 men over the course of its history; Saturday night will be the first time that a woman makes the cut. Predictions of the outcome of the fight are varied. Rakoczy, who is 12 years the senior of her opponent, has a 33-3 boxing record, including several world title victories, making her the favorite if the bout turns into a stand-up war.

The younger Pena has won three of her four MMA victories through submission, seeming to give her the edge if the fight ends up on the ground. This is somewhat countered, however, by Rakoczy’s submission victory over more experienced ground fighter Revelina Berto during the regular season.

Female fighters are a new innovation for the Ultimate Fighting Championship (UFC), the sponsoring organization behind the highly successful television show. During the season, fans consistently voted the female fights as their favorites, which certainly bodes well for the future of female contestants on the show.

UFC President Dana White told the FOXSports online podcast The Fighter & The Kid that the debut of female MMA fighters at the 135-pound class has been so successful that the organization will be opening a 115-pound strawweight class.

“I never in a million years thought that it would take off the way that it has,” White said on the podcast.

According to White, the women’s fights drew a 44-percent higher rating than the men’s during The Ultimate Fighter Season 18. A fight between the two coaches Rousey and Tate is scheduled to take place during UFC 168 on December 28th for the women’s bantamweight title.

The fight between the two talented female bantamweights may be the most hyped of the fights taking place during The Ultimate Fighter finale, but it is not the only one fans have been waiting to see. UFC lightweight veterans Nate Diaz (25-16) and Gray Maynard (15-11) will square off in a rubber match; they are currently matched with one win apiece. A heavyweight bout between Jared Rosholt (9-8) and Walt Harris (6-1), while not a title fight, promises to be a classic mixed-martial arts battle between Rosholt the wrestler and Harris the stand-up striker with proven knockout power.