The Walking Dead Indifference: Duality Is Scary and Not Welcome

By Michael Smith on November 4, 2013Comments Off on The Walking Dead Indifference: Duality Is Scary and Not Welcome 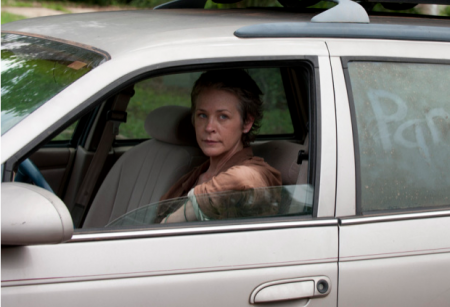 The general consensus is that Carol in The Walking Dead is a sort of earth mother all caring and sharing, but, her role as survivor “mommy” has a scary duality and Rick shows in Indifference that it is not welcome at the camp anymore. It last week’s episode we learn along with Rick that she will do anything to protect the their dwindling group. Even murder and burn two survivors who caught the “walker flu.”

Those who were surprised by Carol’s confession haven’t been paying attention. The woman was teaching children how to kill with knives and pointed objects. Rick’s, potentially sociopathic son, Carl was concerned and bothered enough by her teaching curriculum that he told his dad. This knowledge obviously helped Rick to come to his conclusion about just who murdered David and Karen.

After getting into a knock-down fight with Tyreese the week before about the issue, Rick immediately put on his cop hat to work out who had killed the two. Tyreese has been maddened by his grief and that was shown by his hammer wielding last week. This week the man is just as unhinged, but, appears to be getting back to what passes as normal in walking dead world. However, he only calmed down after intervention by Michonne.

For viewers who have had a fly-on-the-wall perspective of Carol and her motherly ways, it should not be a surprise. Inside this woman lurks a cold-hearted killer who has surfaced before. The two girls whose father is infected in episode two, has Carol encouraging one of the them to dispatch poppa with a knife thrust in the ear. When the youngster, understandably, backs out, Mother Carol steps in to do the job. She does comfort the girl, but, she did so after first supporting the child’s decision to kill her father.

This particular scene spoke volumes about the duality of the woman’s character. The entire sequence was scary in a deep and disturbing way. It is not surprising that this “teacher” went on to murder and burn two other members of the group. In The Walking Dead, duality may be as catching as the flu, but it is clearly not welcome.

Another character who suffers from an obvious internal duality is Bob. Nice guy; wants to be helpful, but, he has a drinking problem. The man is so addicted to alcohol that he has endangered the group twice. Daryl handles Bob’s dual nature differently than Rick. He warns the man that if this continues, he will not be a member of their group. Daryl’s reaction makes as much sense as Ricks. Bob, after all, has not killed anyone yet with his actions. Carol, however, has rather spectacularly murdered two survivors who caught the flu. 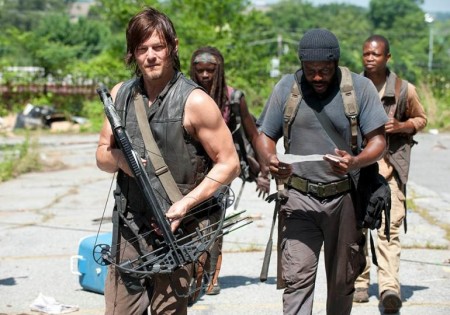 While Rick has put his “killer” hat back on, along with his sheriff’s hat, he did give Carol a chance. Even though her decision to circumvent the flu by burning was as ineffectual as it was wrong, her actions created a huge amount of grief, rage and disharmony within the group. Her double murder had a ripple effect and she clearly drove Tyreese over the edge.

It was this lack of thought behind her actions that obviously forced Rick to his banishment of Carol. In the world of The Walking Dead, duality may be necessary to a degree. After all, Rick himself has been going through a “splitting of self” where he has tried to turn his back on his “true” nature. From killer to farmer and back again.

Of course Carol, Bob and Rick are not the only characters who suffer from this duality of soul and self. Each survivor is constantly living a conflicted life. Dealing with walkers daily on top of the struggles to exist and defeat the increasing amount of obstacles has played havoc with all their sensibilities and nature.

This may be the reason Rick sent Carol away. He is all too aware of the problems with duality; personally and within their little group. He knows that Carol’s actions, like his own, are scary. Rick was upset when he “lost it” against Tyreese last week. He also appeared to be a little frightened at how quickly he lost control. This awareness obviously triggered the banishment; Rick can control his duality, but, with Carol it is an unwelcome problem. He knows that she could do the same thing again. In The Walking Dead episode Indifference, he had to let Carol go. His own duality kept him from killing her or giving her up to Tyreese.