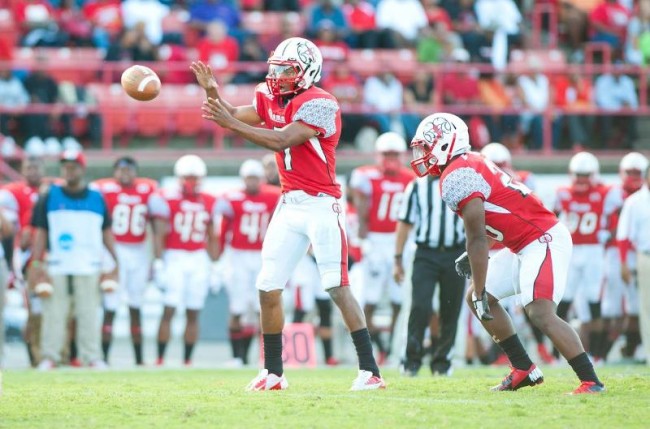 The quarterback is under constant pursuit from the opposing team during a championship game. For Winston Salem State quarterback Rudy Johnson the kind of blows opposing defensive ends deliver during the game came the night before, in a tragedy that has led to the cancellation of the championship. At a celebratory banquet on Friday night Rudy Johnson was jumped by five members of the opposing Virginia State football team. The incident took place in the bathroom of the Anderson Center on Winston-Salem State’s campus during a banquet that was affiliated with the Division II Central Intercollegiate Athletic Conference championship weekend.

The game was scheduled to take place at noon on Saturday. Now, it will not take place at all along with the CIAA volleyball championship game which was also cancelled due to the incident.

The two teams were sitting at opposite sides of each other during the banquet. Reports have surfaced that Johnson left to use the bathroom and the fight broke out there. Now several members of the Virginia State team are being sought by police. The Winston-Salem Journal has reported that an arrest warrant was issued for Lamont Britt on the charge of “misdemeanor assault inflicting serious injury.” Britt is now being held by Forsyth County on $7,500 bail and awaits a December 9th appearance in court. Police are still investigating the identities of the other players involved. Officials investigating the incident say that members of both schools were participants in the fight, but that Johnson was the victim of the altercation.

The associate director of media relations at Winston-Salem State has reported that Johnson was taken to an area hospital, was treated for wounds sustained in the fight but was later released. Johnson arrived suffering from blows to his face and head as well as suffering a “head laceration” and a swollen eye, according to the arrest warrant.

“Today’s event was supposed to be a celebration for both teams and for all the players who were being recognized for an outstanding season,” said Winston-Salem State Chancellor Donald Reeves. “The actions from the Virginia State players certainly changed the outcome for everyone.”

The reasons for the fight have not yet been confirmed, but many reports of the incident are making specific reference to Johnson’s importance for Winston-Salem State. Johnson was averaging 230.7 passing yards per game, a mark that led the CIAA this year. On Wednesday, Johnson was named first team all CIAA.

Winston-Salem State had won back to back CIAA championships and was looking to win their third straight title. Both WSSU and Virginia State were entering Saturday’s matchup with 9-1 records and were a perfect 7-0 in conference games. The cancellation of this game could hurt Virginia State’s chances of reaching the Division II playoffs. Currently No. 6 in the Super One Region, they could be pushed out even if the NCAA does not take disciplinary action banning them from further participation. Winston-Salem State should be a lock to advance without the championship game.