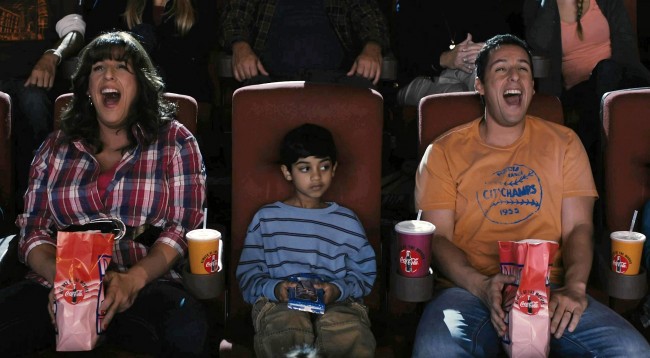 If you are wondering who tops the  Forbes 2013 List of Overpaid Actors, the winner is … yes, you guessed it Adam Sandler.  Sandler is officially, totally overpaid for what he does.

While he can still demand a paycheck of $15 million or even more, the studios are not that happy to employ him at this rather huge salary.  After a whole string of movie misfires, he has now made the grade to top Forbes’ 2013 list.

Let’s look back a little.  Remember Jack & Jill, that delightful film where Sandler played both parts of a brother and sister twin set?   Just in case you forgot, the trailer is included below.

OK, the movie grossed $150 million, but the darn thing cost around $80 million to make.  Still sounds like a good profit?  Bear in mind that the studios take about half of the box office receipts, this means that Sony, who also had to pay to advertise the film, only got around $70 million in their grubby little paws.

Then there is That’s My Boy, where our boy (all of 47 years old) played the father of 35 year old Andy Samberg.  Ouch, even worse.  The film had a budget of approximately $70 million, but brought in a mere $57 million at the global box office.  Bad news indeed, considering Sandler’s big salary, yet again.

OK, when Adam Sandler has a hit, he really has a hit, but how easy is it to tell when the next movie is going to go great, and justify that great big payday?  How can the studios manage to judge when he is going to hit that Forbes 2013 List of Overpaid Actors?

Sony were happy people with the film Grown Ups 2 for example.  The film grossed a lovely $246 million, on an approximate $80 million budget.  Not bad at all and it made for Adam Sandler’s best performing movie ever.

How long do you think the studios will carry on paying up before they get tired of hoping for the next hit?  Or will they maybe tell him to do more animated work like that great success Hotel Transylvania, which was actually his biggest hit and grossed $358 million globally at the good old box office.

Just so Sandler doesn’t feel too bad, Forbes compiled their list by looking at the last three films each actor appeared in over a period of three years leading up to June 1.

Due to the name of the game these days, actors don’t always make that many movies per year anymore.  In fact, one contender for the title, Drew Barrymore, who has been on Forbes’ list for several years, didn’t make the grade in 2013.  She didn’t make enough movies in their qualifying time range.

Next on Forbes’ scale is pay, expenses and movie budgets.  What they do is to calculate a return on investment for each actor, they then average the figures to get the overall return.

Seems that being a movie star isn’t always what it’s cracked up to be.  You get promised all those millions, and when you finally earn them, oops!  They want to take them away again.  Adam Sandler’s normally cheerful smile might turn to a frown as he hits the top of Forbes 2013 list of Overpaid Actors and maybe has to have a rethink about his demands in the future.