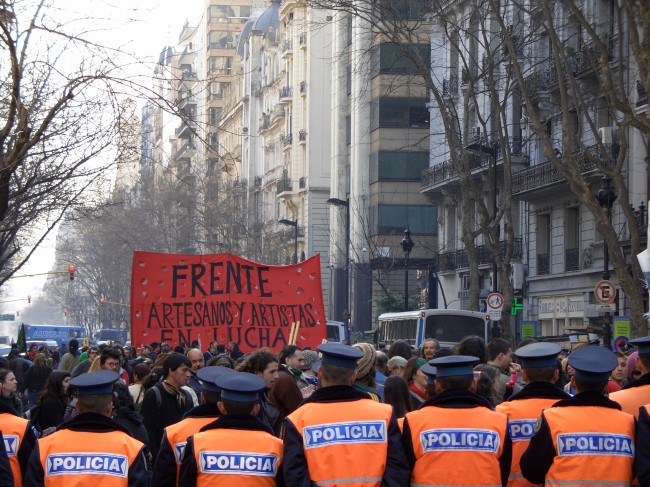 South America’s second largest country is under a state of emergency and teetering on martial law as a result of government inefficiency and Mother Nature joining forces.

Buenos Aires’ Mayor, Mauricio Macri, has declared a state of emergency in Argentina’s capital. The city has been belted by a heat wave since a week before Christmas, which is responsible for at least three deaths and has sent scores to area hospitals.

Power outages and water shortages are impacting thousands of individuals, with the young, infirm and elderly most at risk. The heat wave, which has averaged 38 degrees Celsius (100 degrees Fahrenheit), has caused some people to be without water or electricity for as long as fourteen days. Because of the aging water system, which has not been upgraded since the ’80s, water is unavailable during power outages when electricity cannot reach the pumps.

“Without water it’s unbearable,” said one man. “You cannot live. Above the tenth floor, within 48 hours, it’s a death trap. If there is sun and 38 or 39 degrees – as they are saying – the firefighters are going to bring down bodies.”

People have started protesting in the streets and calling on the government and the utility companies to take some form of action. Angry about the lack of upgrades to the electrical grid to deal with emergencies like this, Macri responded by declaring the state of emergency.

To escape the blistering heat on Christmas Day, when the temperature hit 111 degrees Fahrenheit, thousands descended on the riverside town of Rosario, located 180 miles north of Buenos Aires, to cool off. A large school of piranha attacked the swimmers and 70 were sent to area hospitals for treatment, with many having lost fingers and toes to the swimming meat eaters.

Argentina is already prime for revolution, and this latest fiasco just might be the tipping point which will fulfill a prediction by The Economist. Placed in the “Very High Risk” category of countries predicted to experience violent social upheaval in 2014, Argentina joins Syria, Iraq and 14 other countries on the list.

Inflation is running at 28 percent and recent strikes by the police have set off rounds of looting, rioting and unrest in each of the country’s provinces. In August, 100,000 Argentines took to the streets of Buenos Aires to protest repressive political policies by President Cristina Kirchner’s administration. Recently, masked protesters got into a pitched battle with police outside of Congresso, protesting a variety of governmental changes in college tuition.

Argentina, the country that invented the tango, experienced a military dictatorship from 1976 − 1983. With the complicity of the American intelligence group, the CIA, 30,000 residents of Buenos Aires were made to “disappear.”  In 2001, rioters turned to the streets when the government privatized several corporations, including Spain’s Repsol and the Argentinian airline, Aerolinas.